The vice-president of university relations, Dr. Timothy L. O'Malley, issued an email stating that the Planned Parenthood job opportunity "announcement has been removed."

Everyone knows what Planned Parenthood does.

Not only is it the largest abortion provider in the nation, but it feeds the godless culture of death that keeps the abortion cycle running.  In many ways, Planned Parenthood is the flagship of the sexual revolution, the antithesis of Catholic moral teaching and natural law.

However, notwithstanding Planned Parenthood's immoral mission, the Catholic University of San Diego's School of Leadership has posted a job entry on its web site offering a paid position with Planned Parenthood of the Pacific Southwest.  The post was made on May 23.
[See link here. If link appears blank, your voice was heard. It was removed.]

Why is this happening?  How can a Catholic institution be doing Margaret Sanger's bidding?  Do university officials know about it?

In an attempt to find out, I sent a polite email to Dr. Mary Lyons, President of the University of San Diego, expressing my concern.

A week later, I sent a second email message restating my previous message.

Then I called Dr. Lyons' office directly.  The receptionist transferred my call to the School of Leadership where I left a voice message for Beth Garofalo, Assistant Director of Leadership Programming.  As of this writing the university has not replied to my phone calls or email messages.

How you can be the voice of the unborn

To get Planned Parenthood removed from this Catholic institution's web site, please lend your voice to the voiceless -- the unborn.  Be their voice by joining TFP Student Action in urging the University of San Diego to delete Planned Parenthood from its web site.

[copy & paste this tweet]  This Catholic U Offers Job at Planned Parenthood. Tell them to stop. http://dld.bz/cEU5Y @tfpsa

[For example]   I'm deeply concerned because I found out that USD currently offers Planned Parenthood on its web site as a job opportunity.  Abortion is wrong, a grave sin against God.  How can this happen?  Doesn't USD believe in the right to life?  Please remove Planned Parenthood from the web site of the School of Leadership.  Thank you. 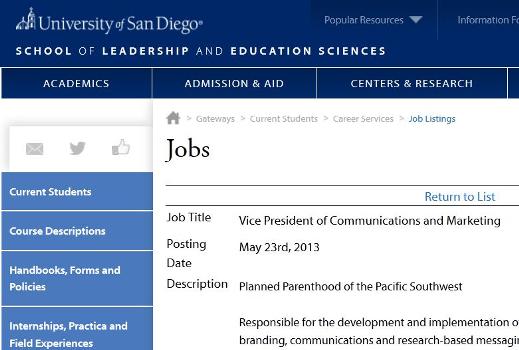