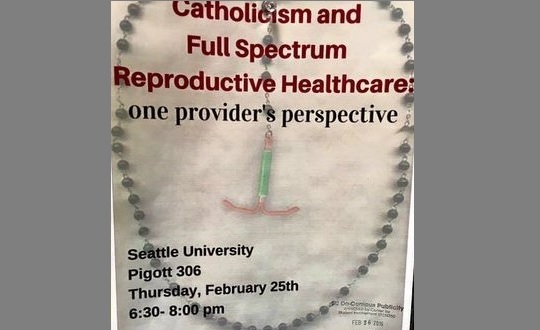 Update: At about 6:40 p.m. Eastern the student group sponsoring the event posted on Facebook: "In order to comply with the institution’s request that we represent multiple viewpoints at this event we have decided to postpone. Sorry for the inconvenience we look forward to continuing this dialog beyond Facebook."

"The promotional materials associated with this event were outrageous and offensive to the Catholic character of our university. The way the event was promoted is not acceptable as it denigrates Catholicism and the materials should have never been approved. The event will not be taking place this evening and the students involved in the planning will be looking to include additional viewpoints and perspectives before seeking to reschedule it.

"Our understanding is that the students will be removing the flyers posted or otherwise placed around campus. Additional measures will be taken to prevent such materials from being distributed on campus in the future."

An unofficial student group at Seattle University is hosting an on-campus event this evening on reproduction and healthcare that will feature a Planned Parenthood employee, and flyers of the event posted around campus include a sacrilegious image of a Rosary with the crucifix replaced by an intrauterine device, a type of hormonal contraceptive inserted into the uterus to prevent pregnancy.

The event, “Catholicism and Full Spectrum Reproductive Healthcare: One Provider’s Perspective,” is hosted by Seattle Nursing Students for Sexual and Reproductive Justice (Seattle NSSRJ), an unofficial group of graduate students at Seattle University.

In the image of the distressing flyer provided to The Cardinal Newman Society, a stamp of approval from the Center for Student Involvement is visible in the lower right hand corner, indicating that the flyer was approved by the University to be distributed on campus. Following inquiries, the Newman Society was informed that the flyers would be taken down, however, the event itself will still take place in the University’s Pigott Auditorium, according to the executive dean for graduate education at the University’s College of Nursing.

“It’s hard to believe that this sacrilegious flyer is coming from a Catholic university, and that a Planned Parenthood speaker has been invited to address students,” Janet Morana, executive director of Priests for Life, told the Newman Society. “Students who choose Catholic colleges, and the parents who help pay the tuition, are looking for an education that is consistent with their faith.”

“That this image featuring the desecration of the Rosary was produced and distributed at a Catholic college is just outrageous,” said Morana.

A student representative for Seattle NSSRJ and the designer of the poster told the Newman Society that the posters were approved by the Center for Student Involvement. “The poster was not intended to be sacrilegious, but rather to challenge and promote respectful discussion around this complex issue,” she said. “The posters were approved by our Center for Student Involvement, so we were not aware that they did not align with the school’s values.”

However, the director of the Center for Student Involvement, Bernie Liang, told the Newman Society that he and his staff “were not aware and do not understand why this flyer was approved.”“We are outraged by the offensive nature of the image and cannot tolerate it on our Catholic campus,” said Liang. “We are investigating this matter and putting measures in place to prevent it in the future.”

The student representative for Seattle NSSRJ told the Society that the scheduled event this evening will feature “a local medical provider who will be sharing her personal story about growing up Catholic and her experience offering full spectrum reproductive care.”The “local medical provider” is Dr. Sara Pentlicky from Planned Parenthood of Seattle, according to the Facebook event page. “Dr. Pentlicky from Planned Parenthood of Seattle will be giving a presentation and discussing her experience of being raised Catholic and how she came to be a full spectrum reproductive healthcare provider,” the page explains.“

Many hospitals and medical facilities are Catholic-based; providers, employees and patients seeking birth control options, miscarriage management and abortion services often encounter obstacles when attempting to access care,” the student told the Newman Society. “As future healthcare providers attending Seattle University, it is important for us to listen to a variety of perspectives and to examine our personal values. As students attending a Jesuit [institution], we feel this event addresses the important social justice subject of reproductive oppression.”

John Dogero, a student representative for Seattle University Students for Life, told the Newman Society that “Catholic members from our Students for Life club will attend” the event tonight, “take notes and attempt to bear witness to truth.” Calling their initiative “Catholics Unite!” the Students for Life group stated in a Facebook event description that the NSRRJ event is “bound to be overflowing with misrepresentations of Catholicism.”

“Please consider joining fellow pro-life Catholics at Seattle University to provide a much needed voice for the Church’s teachings surrounding life issues. An authentic Catholic perspective is seldom heard at SU and we need your help,” the description reads.

“The poster is indeed disturbing,” said Dogero. “We intend to file a complaint with Campus Ministry, Student Government and Student Involvement. We will also seek to place an op-ed in the school newspaper, the Spectator.

”Students for Life of America (SFLA) released a statement on the issue this afternoon, encouraging pro-lifers to contact Seattle University’s president, Father Stephen Sundborg, and urge him to cancel the event or ensure that a Catholic perspective on women’s healthcare is arranged.

“By allowing events like this to happen and giving platforms to those who work daily against the very teachings of the Church and the beliefs of a majority of Americans, it’s no wonder so many Catholic students leave their faith when they go to college,” said Kristan Hawkins, president of SFLA, in the release. “How can we expect students to remain strong in their faith when their own schools, such as Seattle University, give conflicting messages and appear to endorse positions that are in direct conflict with Christianity?”

Seattle NSSRJ’s Facebook page states that its mission is “to engage Seattle University nursing students and support their interests in reproductive justice in order to promote a new generation of health providers who are prepared to protect and deliver full-spectrum reproductive and sexual health care as basic human rights.”

Despite the group’s unofficial status, they still seem able to host events on University property, regardless of whether those events include Catholic teaching on crucial life issues. The Newman Society asked the Center for Student Involvement how an unofficial student group was able to secure University space for the event and whether events had to meet any protocol in order to be approved, but no response was received by time of publication.

The Facebook page for Seattle NSSRJ has posted several pro-abortion sentiments, including a post claiming that abortion is “shrouded with misconceptions and complicated by social stigma.” The post goes on to say that “[a]bortion work in all capacities is critically needed.”

Additionally, the group is hosting another event on Seattle University’s campus called “Miscarriage of Medicine: The Growth of Catholic Hospitals and the Threat to Reproductive and End-Of-Life Care” on March 4 in Pigott Auditorium. The Facebook page for the event features an image of a cleric wearing a surgical mask and gloves.

The Cardinal Newman Society reached out to University President Fr. Stephen Sundborg and University Provost Dr. Isiaah Crawford to inquire about why the University is allowing the Seattle NSSRJ event on campus, and whether steps would be taken to prevent Seattle NSSRJ from utilizing campus space in the future, but no response was received by time of publication.