The Conservative Political Action Conference (CPAC), held this year on February 18-20 in Washington D.C. is the largest annual conservative conference in the United States, with no fewer than 10,000 intellectuals, politicians, organizations, students and activists in attendance.

However, many conservatives were dismayed when CPAC organizers allowed GOProud, an openly pro-homosexual organization, to co-sponsor this year’s event. Ryan Sorba’s bold remarks at CPAC uncovered the essential truth that others wished to ignore: A moral wrong can never become a civil right.
“Homosexual vice is fundamentally at odds with traditional conservative principles. It violates God’s law, Natural Law, and common sense,” noted John Ritchie, TFP Student Action Director. “CPAC claims to be a ‘big tent’ for the conservative movement, but the tent sprang a severe leak this year.  The question is: Will it recover?”

“To Keep Our Honor Clean”

In a press release on February 17, the TFP announced the publication of a hard-hitting statement titled “To Keep Our Honor Clean: Why We Must Oppose the Homosexual Agenda for the Military.” It argues against the repeal of the so-called “don’t ask, don’t tell” policy which prohibits open homosexuals from serving in the military.

The press release also announced a news conference held during CPAC to denounce the proposed repeal and its negative impact on military readiness. Sponsored by the Center for Military Readiness, the press conference was attended by prominent conservative leaders including Elaine Donnelly, Tony Perkins of the Family Research Council, and Admiral James A. “Ace” Lyons, USN (Ret.), of Flag & General Officers for the Military. TFP members also attended. 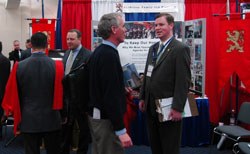 Meanwhile, in the halls and corridors of the Marriott Wardman Park Hotel, where CPAC was held, TFP volunteers played an important role in raising awareness among participants of the homosexual threat to our military. Over the course of three-days, four thousand copies of the statement “To Keep Our Honor Clean” were distributed.

Prominently displayed at the TFP’s booth in the exhibitor hall was the recently published book An American Knight: The Life of Colonel John W. Ripley, USMC by Norman Fulkerson. It tells the story of one of America’s greatest war heroes, known for single-handedly destroying the Dong Ha bridge in Vietnam during the 1972 Easter Offensive, thereby halting the advance of 30,000 North Vietnamese troops and 200 tanks.

Far less known is Col. Ripley’s moral courage on the battlefield of the culture war. Against tremendous pressure, Col. Ripley testified before Congress against allowing homosexuals in the military, which continues to threaten the honor of our Armed Forces. His life stands out as an example for all Americans.

As the debate over the issues of same-sex “marriage” and homosexuals in the military continues to escalate, CPAC and the conservative movement can ill-afford to compromise. The left certainly doesn’t.

During the 2010 CPAC, TFP volunteers collected 300 opinion polls at their booth.  The results are as follows: