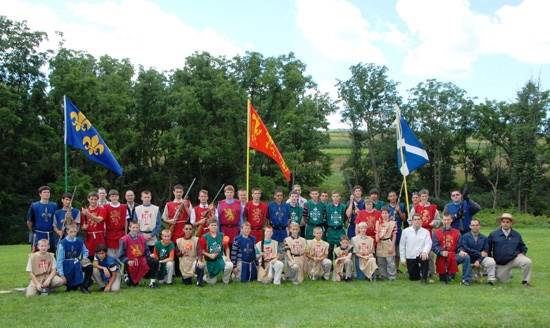 The highest virtues of Catholic chivalry united dozens of boys for the annual Call to Chivalry camp at Saint Louis de Montfort Academy. 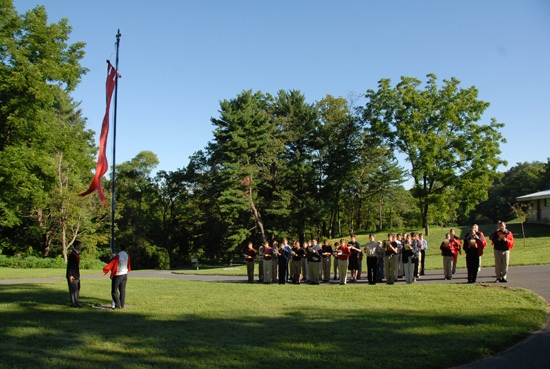 The boys' battle cry rang out across the valley:  "It's better to be an eagle for a minute, than a toad for a lifetime."  Suddenly, two teams clashed in a lively contest of shield ball. Other challenges included a treasure hunt, archery, skeet shooting, tomahawk throws, chess, ping-pong, swimming and a two-day hike in the Appalachian Mountains. 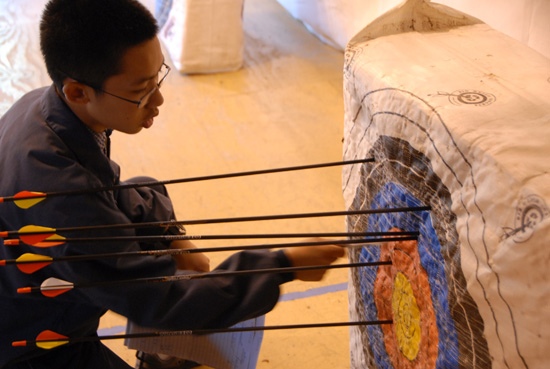 In addition to the taxing outdoor games, camp participants enjoyed hearing talks about the fall of the Roman Empire, Saint Francis of Assisi, Saint Philip Neri, the Swiss Guards, the Siege of Malta, the Battle of Lepanto, Saint John Bosco, the lives of holy Popes and the Papal Zouaves. The boys also learned how to make medieval chainmail and were treated to an illustrated demonstration on the history of the sword, from the Middle Ages to the present, by fencing master Roark Mitzell. 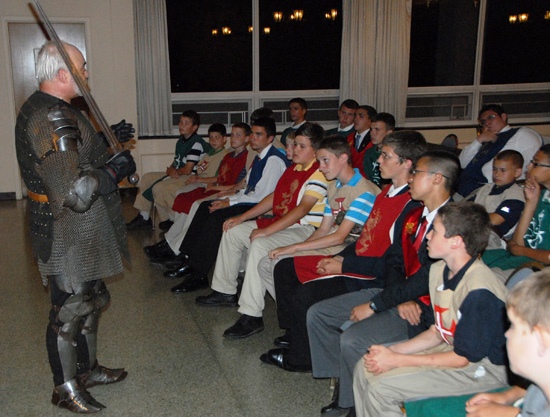 The virtues of chivalry are not dead or obsolete, but thriving in the hearts of many who wish to live for an ideal higher than self.  In fact, just as the knights of old fought for the rights of the Church and defended the weak, the widows and orphans, the modern-day crusader must also stand up and fight for everything holy, honorable and good.  Thus, putting chivalry into practice, camp participants held a peaceful and prayerful rally for the unborn at the abortion facility in Harrisburg, Penn. 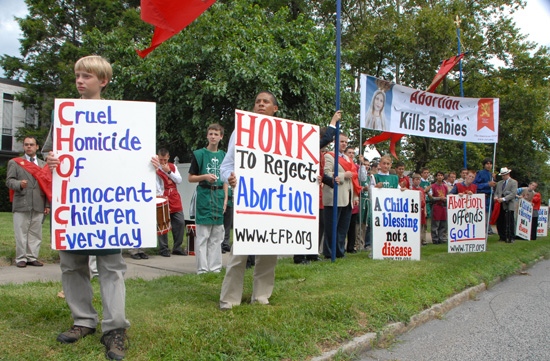 With rosaries in hand, the youthful cadre took a stand.  Their sense of purpose was visible.  "My generation rejects abortion," read one sign.  Other posters read: "Honk against abortion," and "A child is a blessing, not a disease," and "Purity is the answer."

The event culminated with Medieval Games followed by a formal banquet.  "What's that trumpet blast for?" camp participants wondered.  Before they could be answered, a large cake resembling Castel Sant'Angelo in Rome entered the hall.  "Wow..." was on many lips.  Moments later, Godfrey of Bouillon entered; his rousing speech highlighting the source of true manly courage: holy purity.

Yes, these boys answered the Call to Chivalry because God wills it. 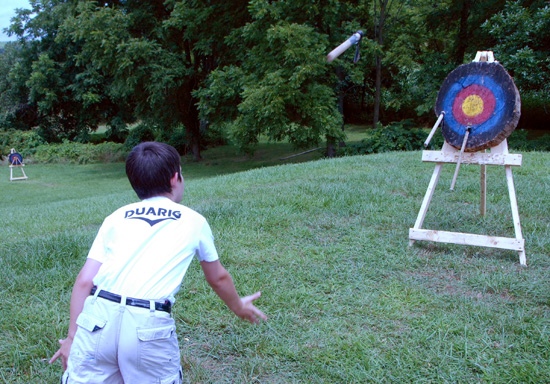 "Thank you all so much for the 10-day adventure for us all!  We'll be hearing stories for weeks to come I am sure! Both William and Jacob spoke about their hopes of next years camping trip with TFP!" wrote a parent from Illinois.

"Jacob is even entertaining thoughts about the school!  We are so grateful to you for using your valuable time leading these little men to become men of honor!  We got to hear quite the detailed report on our twelve hour ride home!  We heard about the variety of talks which the boys really seemed to enjoy!  They enjoyed the jail brake and treasure hunt as well.  We are so happy to have so many great role models as yourselves, living the faith in truth, charity and honor! Thank you all again! You will never know how grateful we are!"

Another parent from Missouri said:

"Thank you so very much for allowing Luke to come on such short notice. We heard hours of stories on our ride home. He has made many wonderful friends and I saw a definite air of maturity in him after the camp. God bless you!!"