To the dismay of local residents the once quiet town of Old Town Spring in Texas has become a center of controversy as the “Greater Church of Lucifer” opened its doors on the eve of All Saints Day.

The church, which claims to not actually worship Satan – in spite of providing links to LuciferianApotheca.com, "a trusted GCOL supplier," which sells statues of Baphomet as well as medallions inscribed with “Dei Nostri Satanas Luciferi Exelsi (our god satan lucifer, the exalted one) – has stirred the local people to prayer and protest.

Soon after the official announcement of the church's public opening, local Catholics requested the assistance of the TFP and its America Needs Fatima anti-blasphemy network.  Answering their call for help, volunteers from around the country showed up to support them.  Upon arriving it became clear how serious the situation had become.

Amid this environment, the TFP volunteers reached out to local business owners to get a better understanding of the situation. One store owner, a Catholic, wept continously when told that TFP and America Needs Fatima volunteers were there to protest and do a public act of reparation.  She gave TFP volunteers parking spots for their vans. Another enthusiastic shop owner gave TFP Student Action members permission to use his property for the demonstrations and placed a large Bible on display outside his shop, saying, “Thank you so much for coming out here. It's good to see God being defended in public.” 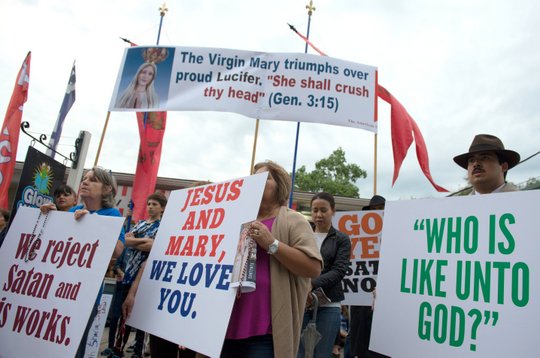 At about 12:00 noon, 12 volunteers met with some locals to pray across the street from the luciferian temple. With signs in hand, the volunteers prayed a public rosary of reparation.

Almost as immediately as they began to pray the first “Hail Mary,” Michael Ford (co-founder of the GCOL) left the property with a look of agitation. Shortly after, a woman came with a dish of burning incense.  “She was blowing incense right in my daughter's face,” said a rally participant, “I was walking behind her with some holy water and she turned around and tried to snatch it out of my hands.”

Towards the end of the first rally, several teenagers began to converge. Although they brandished a “coexist” sign, the protesters were not there to dialogue, but to uphold God's honor and glory.

“I've never met Catholics like you before,” one observer told a volunteer.

Following lunch and a brief break, more TFP volunteers from Louisiana arrived, bringing more signs and a statue of Our Lady of Fatima for the 5:00 PM rally.

“We are here to do a peaceful, prayerful and legal protest, as the TFP has done for over 40 years,” said TFP-Louisiana president Thomas Drake to a crowd of over 125, which included many pro-life activists from the region.

Lining both sides of the street, the mostly Catholic protesters held signs which read “God Yes – Satan No,” “Who is like unto God” and others, as well as banners which read, “We are one nation under God and Satanism is not an American value,” and "The Virgin Mary triumphs over proud Lucifer. 'She shall crush thy head' (Gen. 3:15)." Following the lead of America Needs Fatima and TFP volunteers, the crowd began to pray the Holy Rosary, pausing after each mystery to sing.

“I was shocked by some of the people going into the church,” said one rally participant, “there were at least two of them who had neo-nazi tattoos. They even had these mean looking guys, standing there in front glaring at us from across the street and making threatening gestures. With all the stuff that they've been doing, I honestly think that things would have turned violent if the police weren't there.”

Several of the Luciferians left the grounds of their church and came to side of the protesters with the intention of causing trouble. In particular, two immodestly dressed women approached the protesters to antagonize them. One man, dressed in black, began to photograph those present, getting uncormfortably close to their faces, even after respectful requests to stop. Another man in a white pick-up drove by and shouted to the protesters that they needed to “get a life” and “watch more porn[ography.]”

Regardless of their attempts to disrupt the demonstration, those present paid them little mind and only prayed more fervently than before.  The second rally concluded with a kneeling Consecration to Jesus Christ through Mary and a singing procession with the statue of Our Lady of Fatima.

The GCOL claims that they should be allowed to have their church in the middle of Old Town Spring, a family-oriented commercial district, on the basis of freedom of religion and coexistence.Many don't agree with this.  Let's remember Saint Louis de Montfort's incisive words based on Genesis:  "God has only made and formed one enmity; but it is an irreconcilable one, which shall endure and grow even to the end. It is between Mary, His worthy Mother, and the devil -- between the children and servants of the Blessed Virgin, and the children and tools of Lucifer... The humble Mary will always have the victory over that proud spirit, and so great a victory that she will go so far as to crush his head, where his pride dwells.”Viva Cristo Rey!