Update -- 04-19-11:  YouTube is still silent on the motives that led them to remove our video. However, we reposted the video on another server.   The video documents how same-sex “marriage” advocates assaulted us and attempted to destroy our banner.   Please forward it to all your friends.

Update -- 03/29/11: YouTube removed our video of this campaign at Brown without any explanation.

What we faced today at Brown University, an Ivy League university, had the flavor of a religious persecution. As we peacefully campaigned, about 250 frenzied pro-homosexual students gathered to scream, spit, taunt, insult, assault, and even attempt to destroy our traditional marriage banner. Only with supernatural protection, and a strong police presence, did TFP volunteers manage to complete the campaign without serious injury.

On the front lines for traditional marriage

Situated in the heart of campus, Brown's central quad looked like a good spot to set up our campaign. As we strolled onto campus, the silence was shattered by a long, loud "Nooooooo, not at Brown!" After raising the American flag, TFP Standard and banner on the central quad, dozens of students gathered to take in the sight and snap photos on their cell phones. Also, one could not miss a large rainbow flag hanging from one of the campus buildings nearby. It was like a mini-Berkeley. 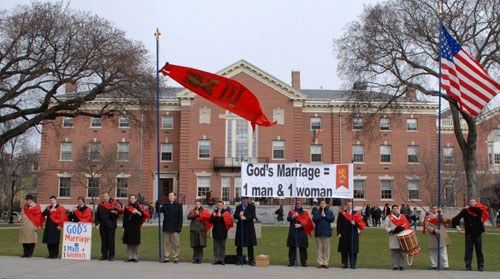 TFP volunteers assemble on the quad of Brown University to defend traditional marriage.

Suddenly, a loud thud-rip noise was heard. I looked up and saw a pro-homosexual student literally crashing through our traditional marriage banner, attempting to destroy it. Running at top speed, he flung himself into it and ripped one side loose. Some students watching from a distance approvingly cheered the act of violence. Then two women kissed in front of our banner to the applause of liberal onlookers.

"Why are you here?" many students asked. We politely told them how the TFP was on a state-wide tour defending traditional marriage. They would just stand there in a sort of daze, and repeat the question again: "But why are you here?" Some of them just couldn't believe it.

Soon, two campus police officers asked us to move to the public sidewalk, forty yards away. We promptly complied with their request and continued the campaign on the intersection of Waterman and Brown.

Student: No objection to pedophilia

"What moral grounds do you stand on to oppose pedophilia, once you've accepted homosexual behavior?" asked Mr. Plunkett.

"You're right," answered the student. "I don't have any substantive objection with pedophilia."

More police officers arrived and playfully told Mr. Charles Sulzen, our bagpiper: "You can stay as long as you keep playing the bagpipes..." 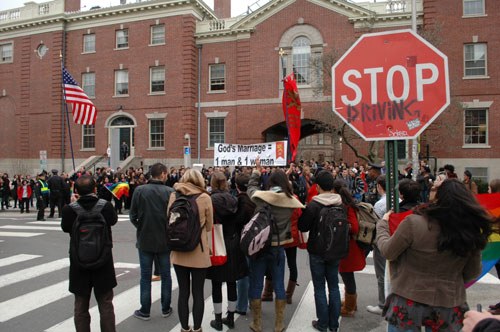 Students repeatedly approached our members with the same comment: "You're very brave for coming here." Watching the out-of-control behavior of dozens of pro-homosexual students, a gentleman on the sidewalk remarked: "They want tolerance. But they can swear, spit and scream all they want..."

As Mr. James Bascom distributed pro-family literature, a woman with a rainbow ribbon on her lapel said: "You're being so intolerant!"

"Why don't you tolerate us?" inquired Mr. Bascom. "So tolerance is a one-way street, then?"

"Yes, yes. It is," said the woman. It became amply clear that free speech at Brown University is not free and that the opposition would do everything they could to silence our message of truth: that marriage is between one man, and one woman.

He spat in TFP volunteer's face

Last week, pro-homosexual students held a protest against traditional marriage at the same location where we were now standing. Most of their signs included the word "equality." However, they clearly wanted to impede our right to equally assemble. "...They had their event last week," observed one of the police officers, "so what's wrong with your being here? I am totally with you."

By now, the number of pro-homosexual students increased to about 250. The pitch of their screaming intensified too, and in the chaos, one of our youngest volunteers, Zachariah Long, 17, was spat upon in the face. "What do I do with this on my face?" asked Zachariah. "Get it out of your eyes," said Mr. John Miller. He wiped the spittle off his face, then reported the incident to a police officer standing nearby. "Yea, I can tell," said the policeman. "It looks pretty bad. If you point him out to me right now, I will lock him up immediately." But the aggressor ran away. Patting Zachariah on the shoulder, the officer continued: "Let's file a report. We'll get him."

Approaching Zachariah, one student said: "Can I shake your hand? Because it takes a lot of courage to be out here." Another added: "This is great! But, I'm going to go right now before something happens. Keep up the good fight. Thanks for being here. It takes a lot of guts. It's really brave."

Brown student: "Don't take their flier. The Catholic Church is against it."

TFP volunteer: "If you're Catholic, you'd know what the Church teaches. The 10 Commandments didn't change."

Brown: "No! That's outdated. Religion is just for the masses."

TFP: "Well, I guess you agree with Karl Marx."

Brown: "If you talk to Father so and so, he'll tell you that he's in favor of same-sex 'marriage.'"

TFP: "If he does, then he's not faithful to the teachings of the Church."

On the other side of the intersection, Mr. Leo Fitzsimmons, a TFP supporter, explained why marriage is important: "marriage produces children. And there's no future without marriage. Same-sex 'marriage' does not produce children." This simple reality befuddled the student who responded with profanities. "God bless America," responded Mr. Fitszimmons. The young student, who looked like an American, was so upset that she yelled, "I'm not American!"

Police escort to our vans

Seeing the violent attitude of the pro-homosexual students, the police chief wanted to escort us to our van and ensure our safe departure. After completing the 1 hour and 30 minute rally in its entirety, we prayed three Hail Marys, shouted our motto "Tradition Family Property – America" and left. Policemen surrounded us on all sides and were assisted by a patrol vehicle on the street. A rowdy group of approximately 250 pro-homosexual advocates attempted to break through the perimeter to harass us. Without ceasing, they screamed obscenities and yelled in chorus over and over again: "God loves gays!"

I never saw a more frenzied collection of students before.

Thank God, the police protected us as we packed our vans. But when we pulled away from the curb, many pro-homosexual students closed in to hit the sides of our vehicles with their fists or palms. A hard object, maybe a rock, was thrown against one of the vans.

Salve Regina at the feet of Our Lady

The International Pilgrim Virgin Statue of Our Lady of Fatima is visiting churches in Rhode Island, giving us the opportunity to see her on several occasions. After such an intense campaign at Brown University, we were able to pray at her feet once again and sing the Salve Regina. I could think of no better way to end the day.

"Are you with TFP Student Action?" asked a lady crossing the church parking lot with small children in tow. "Yes," I answered. "I'm following your tour, watching the videos, seeing what abuses you endure and I truly admire what you are doing. Your valor makes us so happy. And we love the bagpipes.

There may have been 250 people yelling at you today at Brown, but I want you to know that there are many more families like ours supporting you and praying for you. There are a lot of people following behind your tall banner."

Gathering her children around her, the lady continued: "These men are real Catholic men. They do what all Catholics should be doing. They are Catholic heroes. They stand on the street corners [for traditional marriage] and endure being spit upon and get things thrown at them. We need to give them our prayers and our thanks."

We thank Our Lady for granting us the grace to defend traditional marriage, certain that her victory predicted at Fatima will be accomplished: "Finally, my Immaculate Heart will triumph!"