You'll want to see and share this video about the rally of reparation held in Oklahoma City against the satanic Black Mass.

I regret to inform you that yesterday, on the holy Feast of Our Lady's Assumption, the shameful satanic Black Mass and attack against Our Lady took place at 7:00 PM in Oklahoma City.

And since you've been praying and protesting this outrageous sacrilege, I wanted you to be among the first to receive this short video and update from Oklahoma.

At 5:30 PM, TFP Student Action volunteers helped organize a large prayer rally of reparation right in front of the Civic Center, the public venue where the Black Mass was perpetrated against Our Lord. 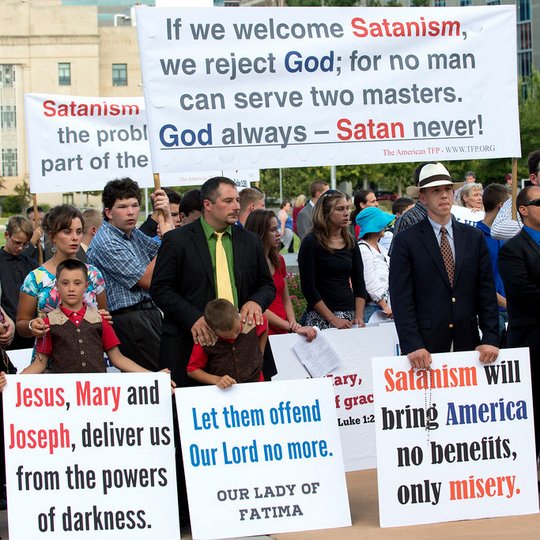 In addition to the unspeakably offensive Black Mass, the satanic group allegedly attacked the Virgin Mary too, pouring blood and filthy substances on her statue before decapitating it and smashing it to pieces.

On this dark day for America, however, throngs of faithful from across the country arrived to console Our Lord and the Blessed Mother.

Public reparation was made by hundreds of faithful souls.

A team of TFP volunteers drove in from California while dozens more flew in from the East coast.

We were blessed and honored to be able to stand up for Holy Mother Church, the true Mass, and the Holy Eucharist -- praying the rosary, holding signs and displaying banners outside the Civic Center.

The four large banners on display in front of the Civic Center read:-- "St. Michael the Archangel, defend us in battle. Be our defense against the wickedness and snares of the Devil."

-- "Mary, Mother of God and ours, we humbly pray: Crush the head of the serpent and deliver America from Satan."

-- "If we welcome Satanism, we reject God; for no man can serve two masters. God always – Satan never!"

You see, evil has never been so brazen.

God has never been so reviled in a public, city-run venue, with the complicity of city officials who refused to cancel the black mass.  Never has the spiritual battle between good and evil been so apparent and so vivid.

That's why you and I must continue to watch and pray. 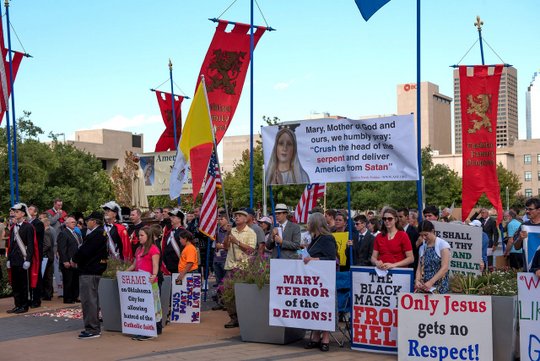 Moreover, we must not grow tired of fighting the good fight.  With Saint Michael Archangel, who won the most decisive battle in Heaven against Lucifer, we proclaim:  "Quis ut Deus!"  Who is like unto God.

Thank you for everything you did to oppose the Black Mass and the attack against the Blessed Virgin Mary.  I know that your efforts and prayers are never overlooked by God, never forgotten by His Merciful Mother.

May God reward you a hundredfold and truly transform America into one nation under God. 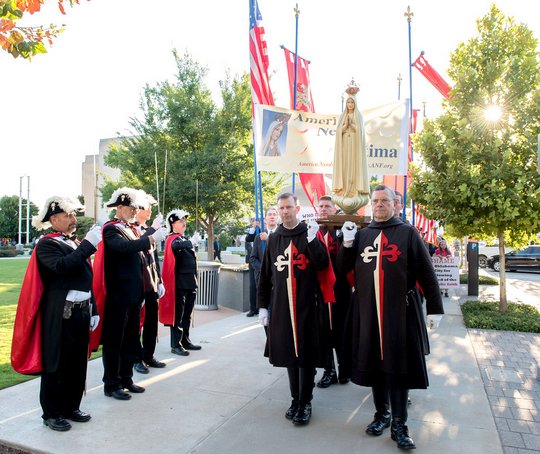 In this spiritual struggle between good and evil, it is vital to remember the power of God, His Angels, and the victorious triumph of Mary over the proud serpent.

Genesis 3:15:
"I will put enmities between you and the woman, and your seed and her seed: she shall crush your head, and you shall lie in wait for her heel."

St. Louis de Montfort writes:
"God has only made and formed one enmity; but it is an irreconcilable one, which shall endure and grow even to the end. It is between Mary, His worthy Mother, and the devil -- between the children and servants of the Blessed Virgin, and the children and tools of Lucifer.... The humble Mary will always have the victory over that proud spirit, and so great a victory that she will go so far as to crush his head, where his pride dwells.”

“But the power of Mary over all the devils will especially shine forth in the latter times, when Satan will lay his snares against her heel: that is to say, her humble slaves and her poor children, whom she will raise up to make war against him. They shall be little and poor in the world’s esteem, and abased before all like the heel, trodden underfoot and persecuted as the heel is by the other members of the body. But in return for this they shall be rich in the grace of God, which Mary shall distribute to them abundantly. They shall be great and exalted before God in sanctity, superior to all other creatures by their lively zeal, and so well sustained with God’s assistance that, with the humility of their heel, in union with Mary, they shall crush the head of the devil and cause Jesus Christ to triumph.”

Saint Maximilian Kolbe adds:
“There is much evil in the world, but let us not forget the Immaculate is more powerful yet, and that she will crush the infernal serpent's head.”

"The Immaculate alone has from God the promise of victory over Satan. She seeks souls that will consecrate themselves entirely to her, that will become in her hands forceful instruments for the defeat of Satan and the spread of God's kingdom."

"The conflict with Hell cannot be maintained by men, even the most clever. The Immaculata alone has from God the promise of victory over Satan.”

Saint Bonaventure:
"Men do not fear a powerful hostile army as the powers of hell fear the name and protection of Mary."

Saint Therese of Lisieux:
“In trial or difficulty I have recourse to Mother Mary, whose glance alone is enough to dissipate every fear.” 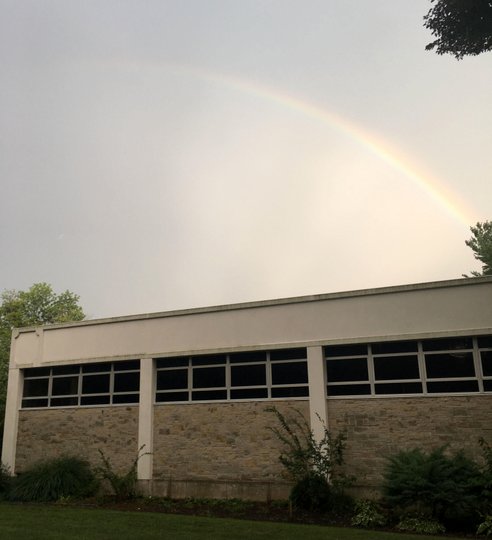 Like a smile from Our Lady, this rainbow was seen at TFP headquarters in Penn. during the rally of reparation in Oklahoma City, lasting over one hour.