If the battle for natural marriage is lost to the homosexual movement, the future of the family will also be lost.  Few things are as important to the welfare of society as true marriage and, therefore, the need to protect and defend it has never been more urgent.

Thank God, 22 young volunteers signed up for a road trip in defense of marriage in Pennsylvania, Maryland and Virginia.  The self-evident truth that marriage is the sacred union between one man and one woman was vigorously promoted during the 7-day tour conducted by TFP Student Action volunteers from October 21-27.

Seven days of constant travel from city to city demonstrated -- just look at the video footage -- that despite the steady erosion of moral values caused by the sexual revolution, American public opinion firmly believes that natural marriage must be upheld, not redefined or tampered with.

Not all campaign stops were equal.  The scorn for natural marriage at Johns Hopkins University was widespread.  Absolutes, truth, reality, virtue, right and wrong, and the existence of God were openly mocked at this center of "higher" learning where the only acceptable position seemed to exclude the nature and benefits of true marriage.  That is sadly how "tolerance" plays out on so many liberal-leaning campuses.

For example, this is how one student responded to the polite offer of a TFP flyer titled 10 Reasons Why Same-Sex "Marriage" Is Harmful and Must Be Opposed: "If you even say one word to me, I will (expletive) kill you!"

Shortly after, more expressions of "tolerance" ensued. Another pro-homosexual student sprayed three TFP volunteers in the face with a water bottle while mumbling curses.  Yet another claimed the Pope would "change" Church teaching against homosexual sin.

Our camera man was physically attacked by a pro-homosexual advocate near the entrance of Johns Hopkins University.  The video camera was severely damaged. 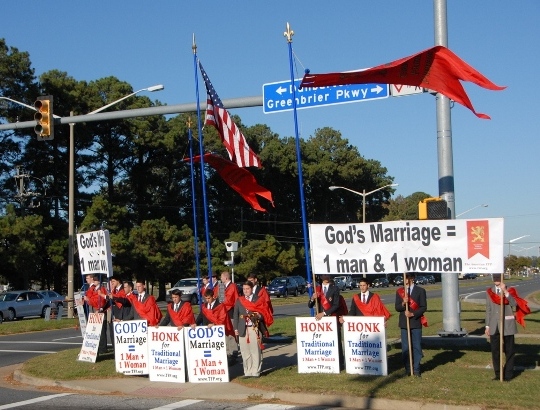 After campaigning in Maryland, the TFP Student Action team traveled to Virginia. Away from the university setting of Johns Hopkins University where liberal professors dominate, the vast majority of Virginians proved to be effusively favorable to traditional marriage.

"I saw a rainbow in the sky and decided to follow it and I found you," said one lady who stopped at a busy intersection after seeing our signs and banners. "God must be pleased with you," she continued with a broad smile from ear to ear.

Aside from just being pleased with the presence of the TFP campaign, others expressed their desire to join and help the cause.  From his car window, a U.S. Navy officer in uniform said: "If I wasn't on my way to work, I'd be out here with you."

The public response to the campaign in Chesapeake was a breath of fresh air.  With the recent imposition of homosexual unions in Virginia, and other states, by the draconian judicial fiat of reckless judges, many people were happy to see our team of young men standing up in defense of marriage, giving out fliers titled 10 Reasons Why Same-Sex "Marriage" Is Harmful and Must Be Opposed.

"It brought tears to my eyes to see you out here," said a lady who stopped to talk with Peter Miller.

The traditional marriage tour ended during a splendid sunrise on Virginia Beach.  As the sun emerged, the TFP standard was raised and gracefully flew in the wind, coruscating under the rays of the sun its motto: Tradition, Family and Property.  Although the caravan has finished, the fight for the future of Christian Civilization continues.  As long as marriage is under attack, TFP Student Action will continue to defend it.