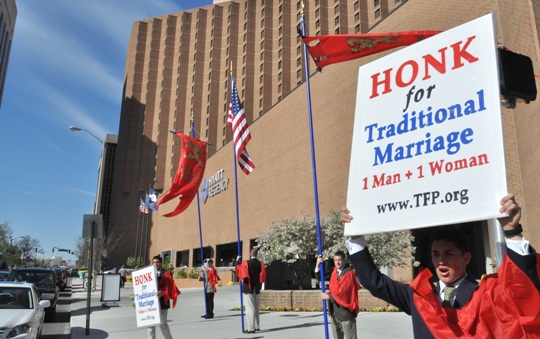 Rains came off and on Friday morning, but that didn't put a damper on our plans to campaign one last time in Cincinnati. Though people were slow to respond to our presence, things soon picked up with continuous honks as motorists entered and exited a busy mall. Just after we set up, two men began to mock us from their car, but when confronted, they timidly drove away. Just as we finished up, the heavens opened and a gentle rain covered the area. Our last day of campaigning in Ohio showed definitively that citizens reject the homosexual agenda.

We hit the road for Indianapolis and set up in the afternoon at a busy intersection near a park. The support from all sides was deafening at times, at one time 9 out of 10 cars honking in support. 'Tolerance' soon reared its ugly head, however, as a man screamed, “I think all marriage is a crime against love!” no doubt many homosexuals agreeing with him. At the end of the campaign, a couple rolled down their window and shouted, “Thanks for being here! We're on our way to get our marriage license!”

The day came to a close with the busiest event yet: the Annual Convention of the National Rifle Association. Both St. Joseph caravans joined forces for this campaign, and the red standard, bagpipes and honk signs were impossible to ignore. Hundreds of flyers were given out to the participants, with many stopping to take photos. Just before we ended, an older gentleman approached and asked what we were about and if we were Catholic. His reply to our answer was, “I'm about to take my wife to dinner to celebrate our 40th wedding anniversary. God bless you guys!”

The day left no doubt that most Americans reject the homosexual revolution.

May Saint Joseph lead them on to victory.