"If a young officer or Marine ever asks what is the meaning of Semper Fidelis," Col. Ripley once told a friend, "tell them my story."

This first cradle-to-grave biography of Col. John W. Ripley by Norman Fulkerson provides readers with the complete story about a great man who is considered by Marines, such as Gen. Carl Mundy, former Commandant of the Marine Corps, to be on the same level as legends Chesty Puller and Dan Daly.

Col. Ripley is most commonly known for his heroics in Vietnam during the Easter Offensive of 1972, where Col. Gerald Turley ordered him to "hold and die," in the face of over 30,000 North Vietnamese and 200 enemy tanks. Praying to God for help, Ripley proceeded to blow up the Dong Ha bridge, preventing the enemy from crossing. For this act of valor he earned the Navy Cross, the nation's second highest honor.

As stunning as the Dong Ha story is, there was much more to Col. Ripley. An American Knight: The Life of Colonel John W. Ripley, USMC narrates his early life and the influences which shaped his personality.

In youth, he was a rambunctious "Huckleberry Finn" who spent his days getting into all kinds of mischief in Radford, Virginia. The stories from this time period, so well narrated in An American Knight, will leave the reader with at least a smile, if not a laugh.After his mischievous "Huckleberry Finn" days, he learned to discipline his wild side and went on to graduate from the U.S. Naval Academy. The strength of will with which he accomplished this task was later applied on the battlefield, where he earned the status of legend during his first tour in Vietnam as a 28-year-old Captain.

Readers will also get to know about John Ripley, the father, but more importantly the chaste husband. When he was approached by people wanting to make a movie about his life he agreed as long as his character was not portrayed as having a romantic relationship in Vietnam. "I have never been," he said, "nor will I ever be unfaithful to my wife." 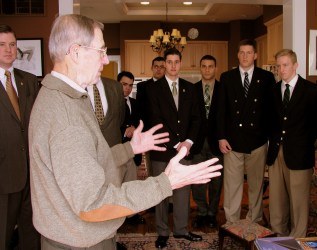 Col. Ripley makes a point during a visit with TFP Student Action volunteers who were honored to meet him.

This was one of the motivating factors which led him to give a brilliant testimony before congress against sending women into combat. He could not conceive of women being subjected to the harsh realities of war and spoke out strongly against it.

An American Knight also narrates his courageous stands against homosexuals in the military. He saw their admittance as "a deviation from values that Marines hold dear and one which attacked their very honor."

The final chapters narrate the struggle Col. Ripley endured with a bad liver. He would finally undergo two liver transplants, the last one of which was defined as the "most dramatic" in history.