Father Tadeusz Pacholczyk, Ph.D., was trained as a neuroscientist at Yale University. After finishing his doctoral work, he worked for Massachusetts General Hospital and Harvard Medical School. He studied for the priesthood in Rome, where he focused on bioethics and dogmatic theology. Father Pacholczyk is now director of education and a staff ethicist at the National Catholic Bioethics Center based in Philadelphia, Pennsylvania. TFP supporter Walter Camier interviewed Father Pacholczyk.

TFP: Father, could you explain what embryonic stem-cell research is, and why it is against Catholic doctrine?

TFP: What do you say to those who claim the embryos used by scientist are really not human?

Father Pacholczyk: One example I use a lot when giving testimony before lawmakers involves a 1940 American law protecting the bald eagle. The law states that if you come across a bald eagle’s nest containing eggs and you decide to destroy one of those eggs, you suffer the very same sanctions and penalties as if you had shot an adult bald eagle out of the air. What is so special about that bald eagle’s egg? What is inside that egg? The answer is very simple. It is an embryonic eagle. It is the very same creature that flies gloriously in the sky. Even an atheist can appreciate the cogency of such a law. We are eager to protect all sorts of animal life.

Yet when it comes to our own humble embryonic origins as humans, we go through sophisticated mental gymnastics to tell ourselves that we were never embryos. We are all too willing to sacrifice young humans on the altar of stem-cell research. There is a profound double standard here that people really need to assess and confront.

TFP: How are the politicians dealing with this matter? What do you expect when you testify before them?

Father Pacholczyk: Speaking with lawmakers is always a difficult challenge. Lawmakers are often driven more by expediency, and they are constantly looking toward their next electoral term. That makes them a very difficult group to address. I have testified on many occasions where I try to present things very clearly to them and get them to adopt what is the morally right thing to do.

However, to actually get them to vote out of a concern for moral truth is a little harder. You face this same problem with Catholic lawmakers. When one’s primary concern is to be re-elected, being Catholic is often a secondary or tertiary concern. Thus, even when you make it very clear that something is always immoral, that may not be of much importance to those lawmakers when it comes to the moment that they have to cast their vote. 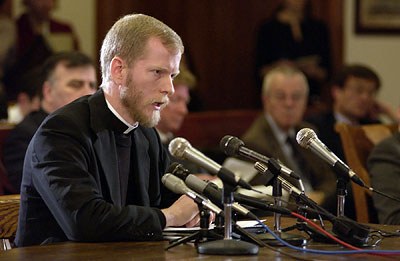 TFP: Father, what are your thoughts on those who think they can appease both sides of this issue by taking out one little cell from the embryo without destroying the whole person?

Father Pacholczyk:The method in question involves pulling one cell out of an eight-celled embryo and using that cell to make a stem cell. The other seven cells theoretically can continue to grow and become an adult.

There are very serious objections to this approach. It is certainly unacceptable to the Catholic Church. I had a long phone conversation with Dr. Robert Lanza, the pioneer of this method about two years before he ever started doing this. I explained to him how this method does not answer the serious moral objections to embryonic stem-cell research.

Second, as you might imagine, these embryos are made by in vitro fertilization. The only proper and fitting place for a young human to come into being is inside its mother’s womb. Embryonic humans should never come into being in laboratory glassware, outside of marital intimacy, and certainly should never become fodder at the hands of scientists to be poked and prodded. The violations here, objectively speaking, are enormous, even though so many in our age don’t see them at all.

Third, when you pull that one cell out of the embryo, you can only make it a stem cell by “coating” it with a layer of human embryonic stem cells obtained by destroying another human embryo from somewhere else.

Finally, when you pull off this one embryonic cell, it may be able to grow into a human being itself. What you may have done is make an identical twin—we are not sure exactly when you can safely pull off a cell in the early embryo’s development, and be certain that you did not just make an identical twin—four cells, eight cells later? So you may now have two actual human beings: the seven-celled embryo and this one cell. Hence making stem cells out of the single cell may still be destroying a human being. You have not solved the dilemma.

TFP: Father, what do you see in the future with all this scientific research and the work you are doing to educate people on this topic?

Father Pacholczyk: It is hard to predict, but I believe we will have to confront a very important issue in a new way: namely the frozen embryo. I am convinced that we as a society must choose consciously to protect those frozen embryos and keep them away from the hands of scientists who want to use them for research.

If you offer up one group of human beings for destruction, what is to stop you from doing the same with another group of human beings? People are already discussing the next scenario of so-called fetal farming. We may come to see the day when a cloned embryo is implanted into a woman and allowed to develop into a small baby who will be aborted for organ harvesting. There are scientists who are seriously discussing doing this. They have done it successfully in animals. This awaits us if we do not carry out serious, moral discernment around these questions and draw very clear lines.

We must make it clear that certain kinds of things can never be done, no matter how desirable a result might accrue. If we protect our young brothers and sisters who are still embryos, the future will be much more manageable, and indeed, promising as we will be able to make use of many exciting alternative technologies like adult and other types of stem cells that are already providing real-time cures for needy patients.

My work is focused on helping people to think about these issues in the proper terms so that science can really serve us rather then enslave us. Many times your “man on the street” does not feel he has the expertise to delve into these matters. That is one of the reasons why the National Catholic Bioethics Center exists. People come to us and we assist them through consultation and educational outreach to help them understand precisely where the ethical lines need to be drawn.