Amid growing protest Satanists plan to stage a second Black Mass at the public Civic Center Music Hall in Oklahoma City on August 15, 2016.  The public sacrilege against God and the Catholic Mass will include the desecration of a statue of the Virgin Mary whose Assumption into Heaven is celebrated that day.

Satanist and registered sex offender Adam Daniels announced that he will invoke Satan through a blasphemous Black Mass followed by a bloody ritual called “The Consumption of Mary,” all performed on city property.

"Every American should oppose this hateful attack against God," said TFP Student Action Director John Ritchie, who hopes to collect 200,000 petitions against the Black Mass by the end of the week.

"So many good people are standing up in peaceful protest," Ritchie said.  "More than 146,000 people have already signed the petition to Governor Mary Fallin and Mayor Mick Cornett, urging them to cancel this act of hatred against Our Lord Jesus Christ and the Blessed Mother.  Every single voice counts in this spiritual battle."

"Satanism is about spiritual destruction, falsehood, and darkness," Ritchie explained. "When we say 'God bless America' we really mean it.  We only love God.  Satan is not welcome.  Satan is excluded from our land.  Because a nation can only prosper and flourish in the measure that it embraces truth, goodness and beauty."

"But -- unfortunately -- there is a twisted understanding of free speech which grants evil the license to undermine our beloved Nation Under God," Ritchie continued. "And darkness wants nothing more than to dethrone God in our culture.  But we cannot let that happen or just sit on our hands and watch this attack against God unfold before our eyes without a prayerful response."

The American Society for the Defense of Tradition, Family and Property (TFP) will be holding a peaceful prayer rally of reparation at the Civic Center of Oklahoma City, Oklahoma, located at 201 N. Walker Ave, on August 15 at 5:30 PM.

"The Black Mass is a public attack against God, so the reparation will be public," said Ritchie.  "God's light will forever overcome Satan's darkness." 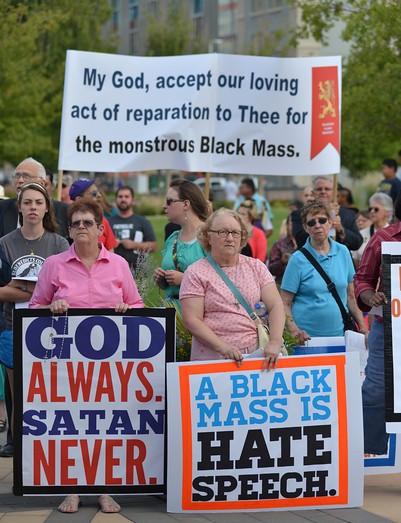