"Shame on Harvard!" followed by "Down with sacrilege!" and "Reparation, reparation, reparation!" echoed across campus as faithful Catholics gathered outside Harvard University's Memorial Hall on Monday to protest against the Satanic Black Mass scheduled to be held there.  Thank God, the sacrilege did not happen due to a storm of peaceful yet robust protest that broke out over Harvard. 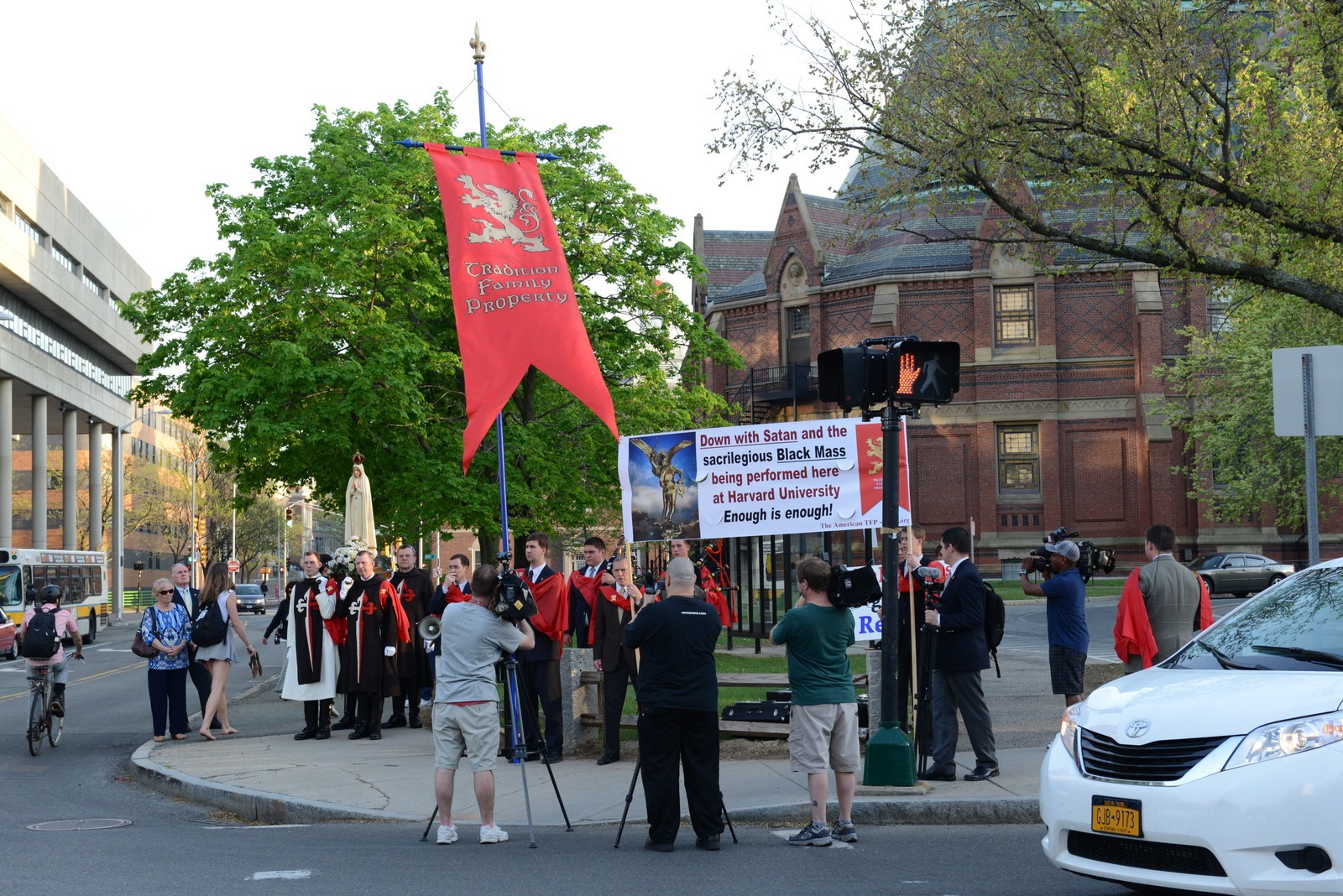 Misleadingly billed as "educational," the sacrilegious black mass not only attacks the Holy Eucharist and the Catholic Church, but also reveals a broadening agenda to destroy the very notion of "one nation under God."  In addition, it aims to mainstream Satanism in America, which must not be allowed to happen.

One thing was clear:  Catholics refused to be indifferent or remain silent in face of the vile outrage.  In that spirit, a contingent of TFP members traveled from Pennsylvania to Massachusetts on May 12 where, starting at 6:50 PM,  they joined forces with the Catholic Action League of Massachusetts and other local Catholics in a prayerful act of reparation and protest.  Several priests were present for the event. 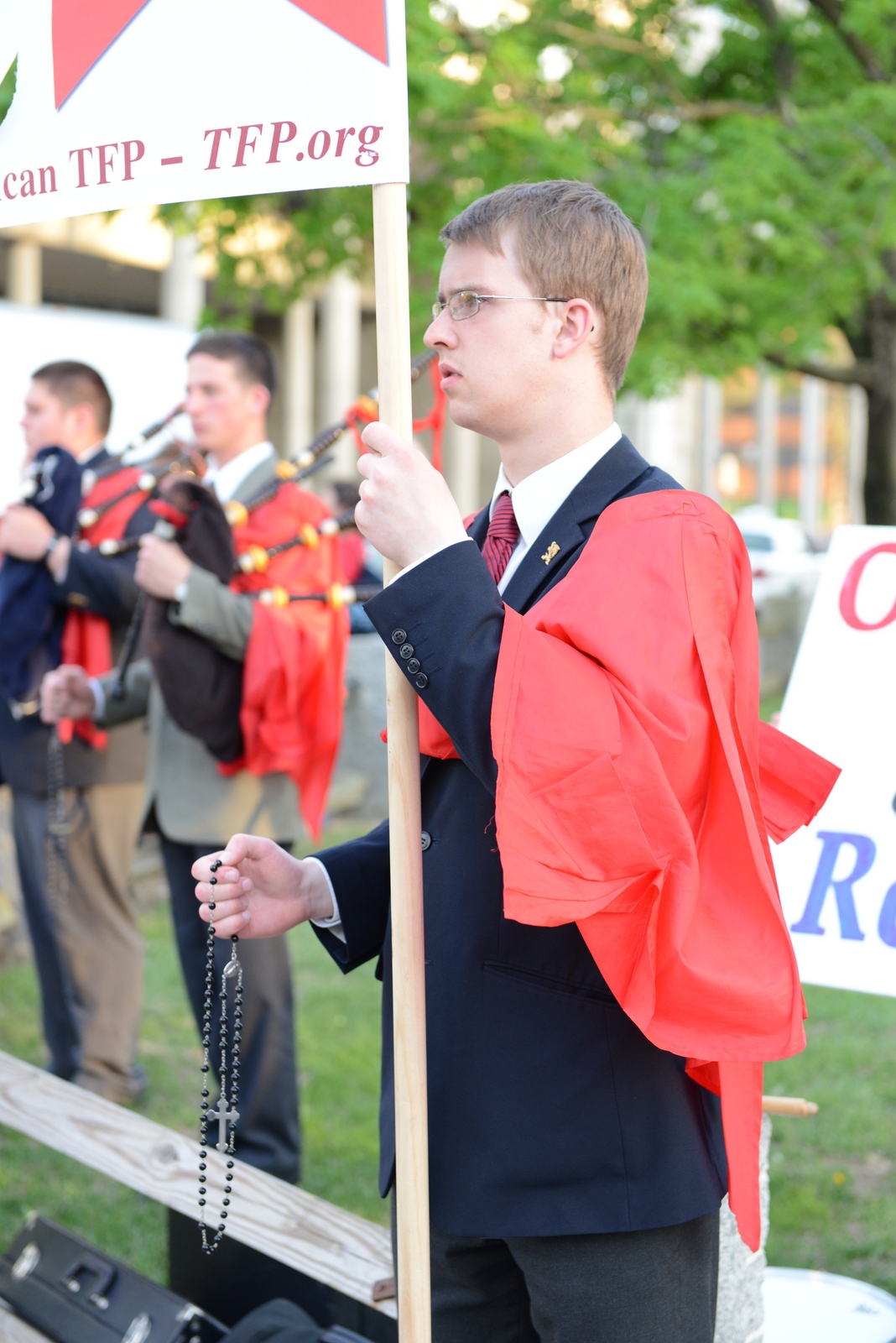 The protest featured the recitation of the Rosary, the prayer to Saint Michael the Archangel and hymns to the Blessed Virgin Mary, whose image was present under the invocation of Our Lady of Fatima, escorted by four members wearing the TFP ceremonial habit.  America Needs Fatima volunteers held a banner behind Our Lady and  students of Saint Louis de Montfort Academy played bagpipe renditions of God bless America, Immaculate Mary and Hail Holy Queen Enthroned Above.

Since the spiritual battle between good and evil has never been more visible, Saint Michael, Captain of the Angelic Hosts, was invoked repeatedly over the bullhorn.  As we prayed, a group of individuals dressed mostly in black with satanic insignia gathered in little groups to jeer and mock the prayers.  One even muttered "Hail Satan!" as he passed by the statue of Our Lady of Fatima. But this did not in the least deter those on the sidewalk who continued praying the Rosary at the intersection of Cambridge and Kirkland streets until 8:35 PM. 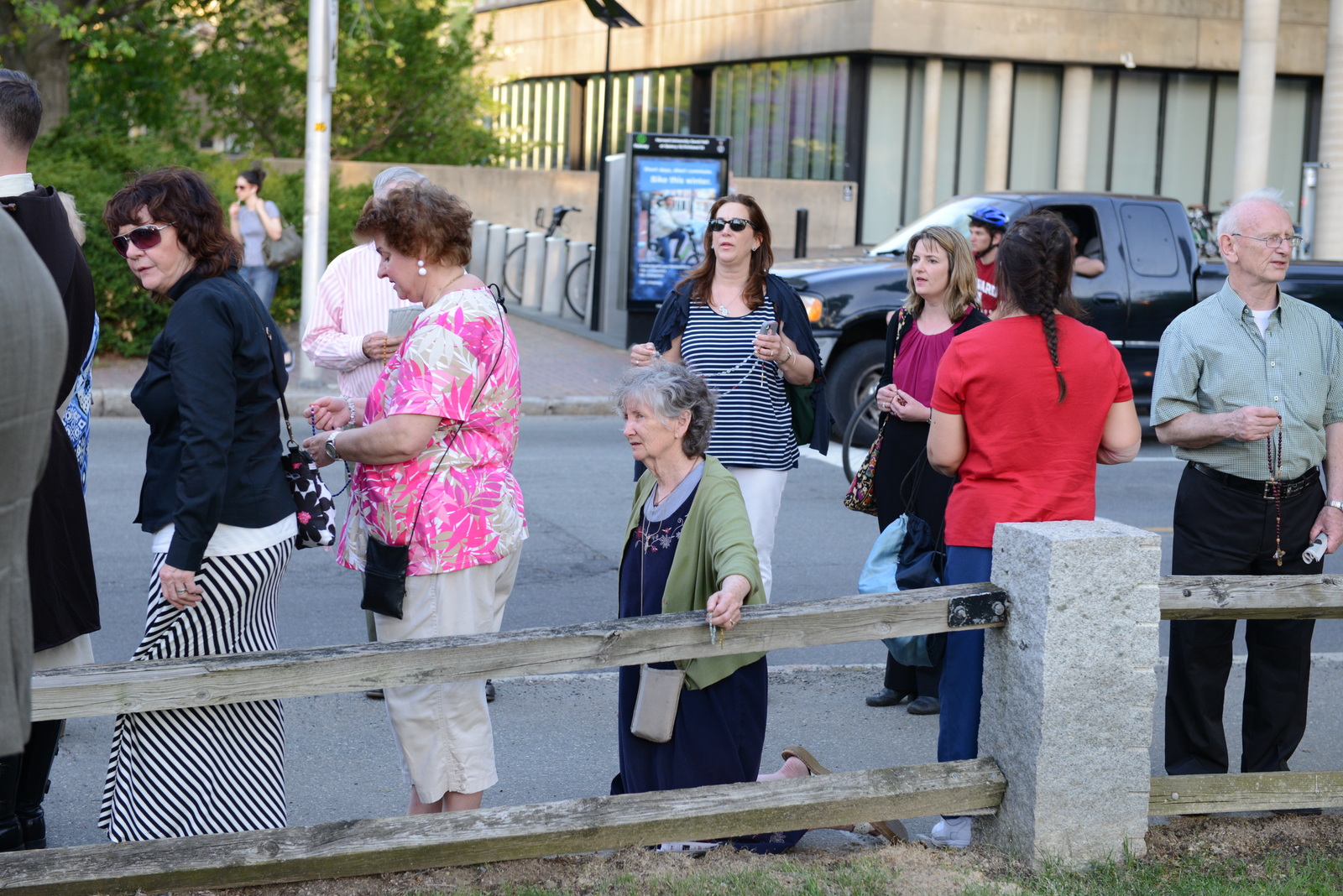 Earlier in the day, TFP Student Action submitted the results of its online petition drive against the black mass to the president of Harvard University, Dr. Drew Faust.  The number of signatures gathered in just three days topped 44,000 and is still climbing by the hour.   The sheer volume of visits to the TFP's online protest page caused the web site to freeze from time to time, unable to cope with the great number of people demanding that the black mass be canceled. 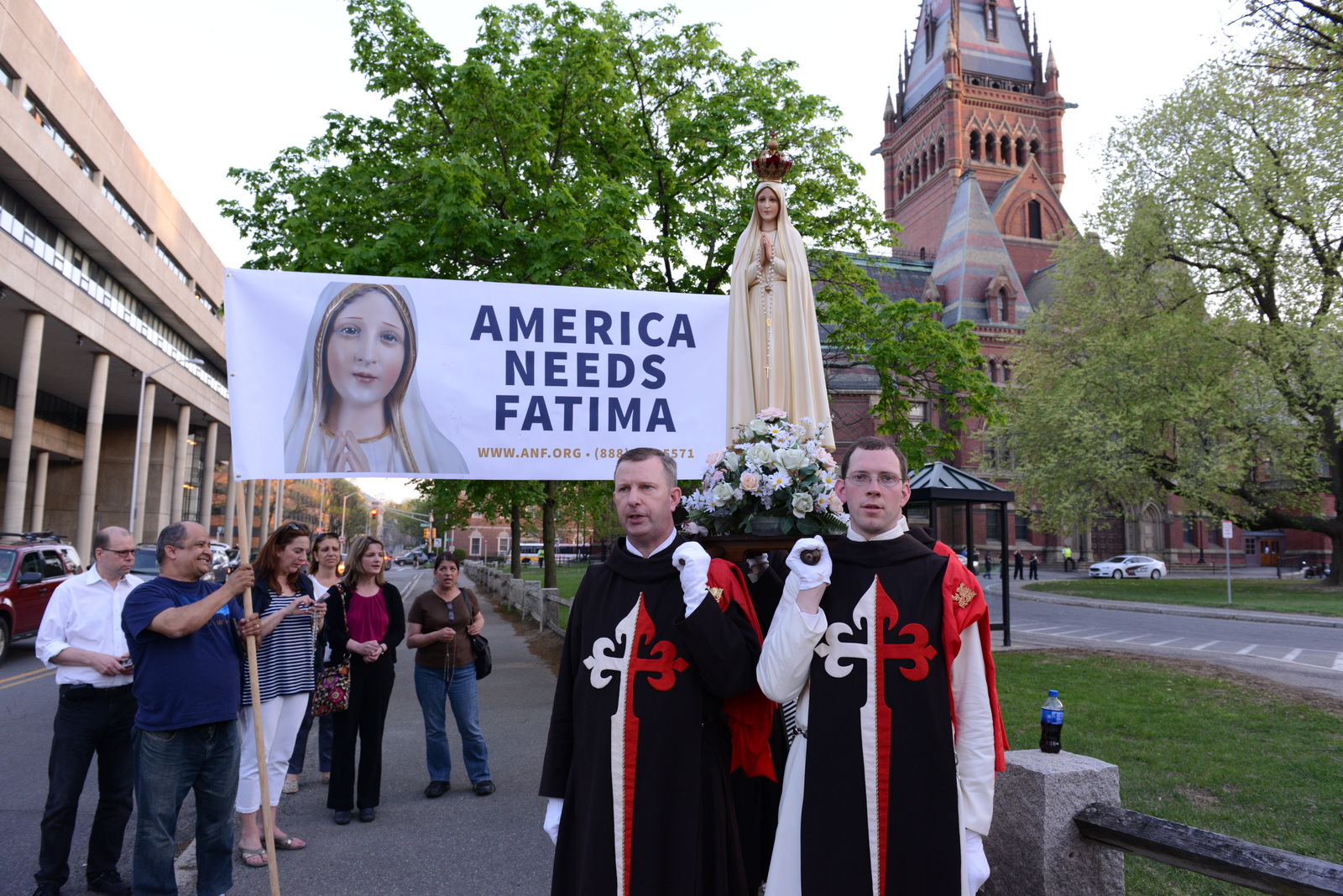 Around 8:00 PM we heard the news that some 30 minutes earlier the Harvard Extension Cultural Studies Club--having been encouraged by the Dean of Students and Alumni Affairs to move the sacrilegious event off campus, and having failed to find a new venue--announced that the black mass was canceled. When I gave the news to Our Lady's brave defenders, they cheered and applauded. We had come, we had seen, and Our Lady won. 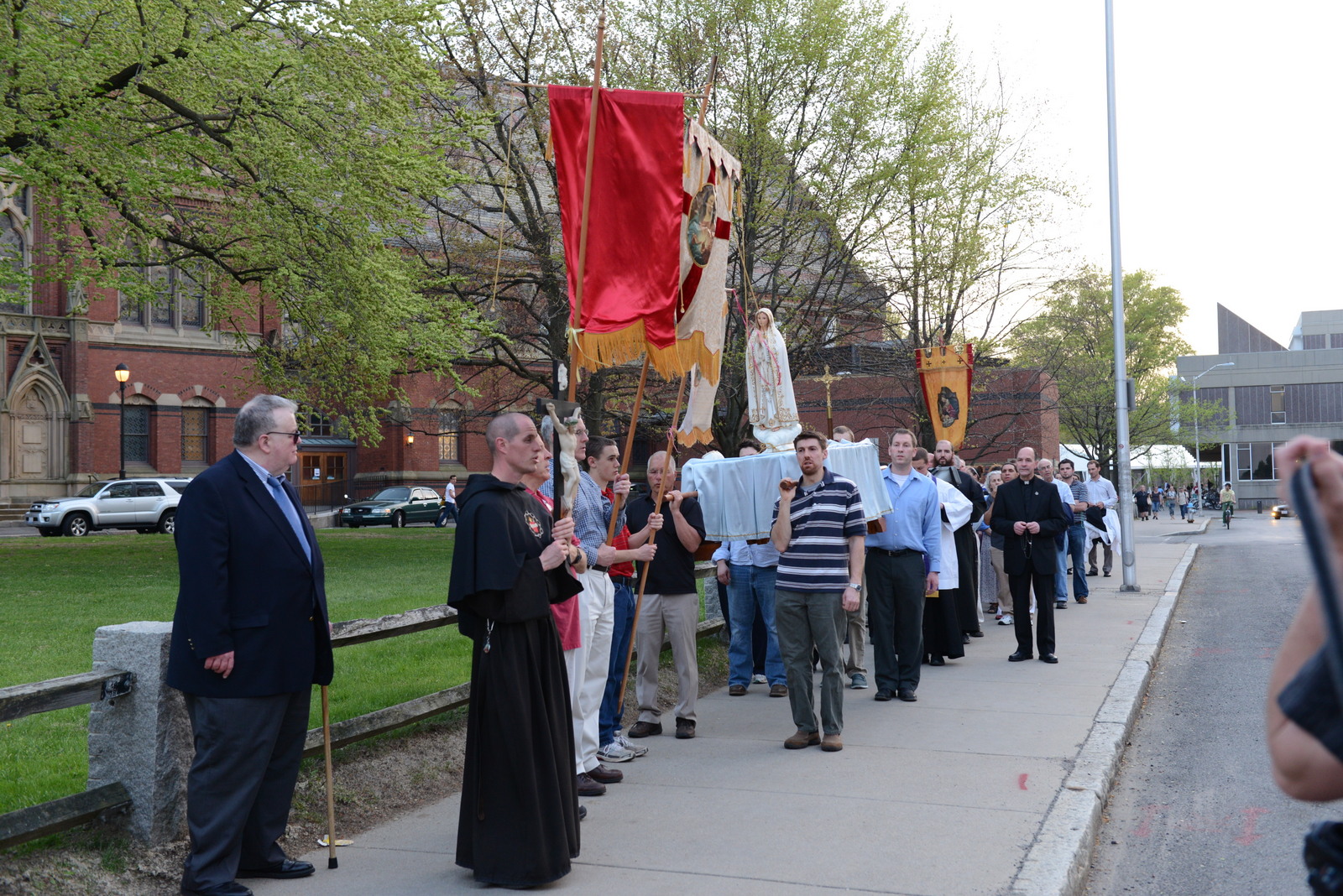 To conclude the protest, Saint Louis de Montfort's Consecration to Mary was recited.  This last prayer seemed to especially unnerve the satanists nearby.  Two of them came up and aggressively yelled insults against Christianity in our faces. Then others, also dressed in black, were overheard saying, "smash the statue," referring to the beautiful replica of the International Pilgrim Virgin Statue of Our Lady of Fatima that wept repeatedly in New Orleans in July 1972.  Their hatred was explicitly directed against Our Lady. With this, TFP volunteers formed a protective perimeter around Our Lady, escorting her safely to the van, while being trailed by those who wished to smash her. 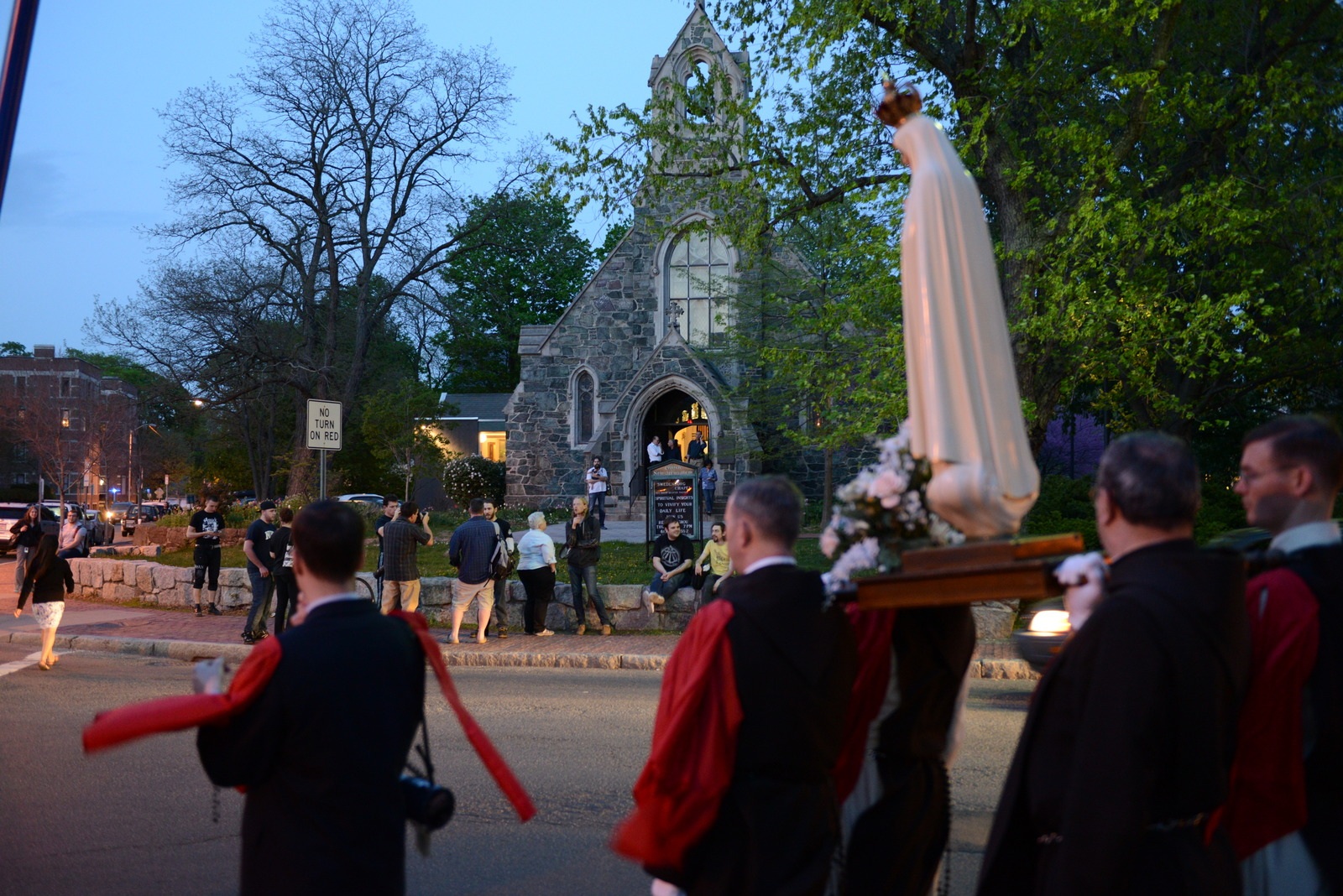 It is opportune to recall St. Louis de Montfort's own words on this topic based on Genesis:  "God has only made and formed one enmity; but it is an irreconcilable one, which shall endure and grow even to the end. It is between Mary, His worthy Mother, and the devil -- between the children and servants of the Blessed Virgin, and the children and tools of Lucifer... The humble Mary will always have the victory over that proud spirit, and so great a victory that she will go so far as to crush his head, where his pride dwells.”

And Saint Maximilian Kolbe adds:  “There is much evil in the world, but let us not forget the Immaculate is more powerful yet, and that she will crush the infernal serpent's head.”