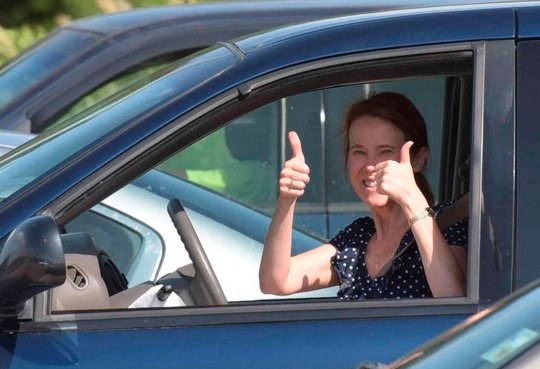 Rosary of reparation at Planned Parenthood

On August 3, the caravan split up into two groups.  One van went to Houston, Texas while the other traveled directly to Beaumont, where we will meet up for more campaigns for true marriage tomorrow.  Before leaving San Antonio, however, the Saint Michael team of TFP volunteers found time to pray a public rosary of reparation for the sins of abortion in front of Planned Parenthood on Babcock Road.

As more undercover videos have been released showing how barbaric Planned Parenthood's slaughter and selling of aborted baby parts really is, we must multiply our prayers and efforts to reverse the culture of death and make abortion unthinkable.

"Y'all are going to get this intersection real loud!" said two fellows who saw us take the signs and banners out of the van in the parking lot.  They were right.

A Catholic priest joined us on the sidewalk and gave us his spiritual and moral support.

The support for traditional marriage witnessed in Beaumont hit record levels.  At one of the intersections off I-10, the friendly honks, waves, applause and thumbs up were constant and almost deafening.   Several newspaper and TV reporters arrived and began filming the TFP rally for God's marriage.  After watching the campaign for thirty minutes, one of the journalists asked in a state of amazement, "Do you ever get any negative reactions?"

It was good for these liberal reporters (one had an equality sticker on her car) to see up close what they so often refuse to report on fairly:  That most Americans don't want the homosexual agenda forced down their throats.  And that moral values are good.

The endless honking proved the point better than anything we could tell them and their liberal bubble was popped for sure.  You could almost hear the leftist mindset falling apart as they watched car after car showing support for natural marriage.  Each honk was a zinger.  And the support was nearly unanimous in favor of God's marriage.

"Can I take a photo with your sign?" asked a young man who parked his car and walked over to talk.  "My sister is planning to have a same-sex wedding and I didn't know what to tell her, but when I saw your sign I thought I should take a picture of it and send it to her.  That will be my response to her."

Another reporter said, "I'm worried what will come next.  Where will it all end?"  A TFP volunteer engaged him in conversation and explained the difference between freedom and license.  We have the ability to sin, but that ability is not a right nor a freedom.  "That's exactly what I believe," he said.  "I agree with everything you said." 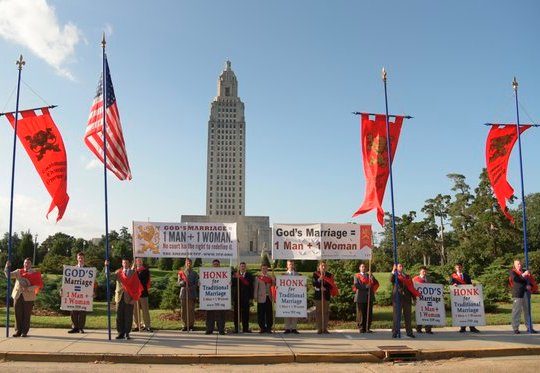 On August 5, the campaign at Ryan and Prion Lake Drive in Lake Charles, one of the busiest intersections in town, received impressive support.

Soon after the campaign began, a woman emerged from the bank behind us. "You can't be here," she said. "Ma'am," a TFP member responded, "it's a federal mandate that any land within five feet from a public road is public property." The woman merely said, "Okay," and disappeared inside.

Five minutes later, two police officers arrived. "You're perfectly within you're rights to be here, but the bagpipes are a security hazard for the bank. They're too distracting," the woman officer said. "I would suggest that you leave and if any accident happens, it will be your fault."

The bagpipers marched across the street to "God Bless America" and met a young man who worked at the automotive store located there. "Doesn't your group have a right to be on that sidewalk?" he asked. With a smile, he said, "If they kick you off that corner, you're welcome over here."

Reassured that the peaceful demonstration wasn't going to be shut down, the young man returned to the store. Meanwhile, many drivers gladly honked their horns in agreement with the TFP message.

"God bless you for being out here!" a young woman yelled.

Another time, a handful of coins was hurled at TFP volunteers from a moving car, followed by "Stop judging people!"
"Thank you for the donation!" was the cheerful reply.

A tall man with a beard approached a young TFP volunteer almost half his height.  The young volunteer looked at him with some concern, but the man with the beard smiled, stuck out his hand and warmly boomed: "Thank God for y'all being here!"

Debating on the sidewalk

Another man who approached: "Why can't two men get married?"

"Two men can never have a child," a TFP member argued.
"What about a man and a woman that can't have children?"
"Nature is still respected.  The inability to have children is an accident, not part of the essence of marriage."
The man scoffed: "You're all giving the same answers, did you study this or something? I can tell you've debated this before."
But he persisted, "What about transgenders?"
"How many genders are there?"
"Well, it's an infinite spectrum!"
"What if I wake up tomorrow and decide I'm not a man?"
"Then you wouldn't be a man, you can get surgeries to stop being a man."
"Then what if the next day I decided I was a man again? What about a Mexican who didn't want to be a Mexican? Did you ever hear of an ex-black?"
"You can get your skin pigment changed!"
"That doesn't change what's inside. Every cell in the body is stamped male or female. You can't change the truth, it's like saying two plus two equals five."

More pro-homosexual protestors soon joined the man. They held a sign which said, "F- these guys."

A woman in her car close to the curb rolled down her window and yelled at the pro-homosexual group: "This is why people hate you!"
"Do you hate us?" they retorted.
"I have children! And your sign is inappropriate!"
They put away their sign soon after.

One of the pro-homosexual advocates addressed a TFP member who was praying, "I see you have a rosary. I'm a baptized and confirmed Catholic. I'm in RCIA and I'm also homosexual!"

It was difficult to know if he was telling the truth.  But as our popular flier, 10 Reasons Why Homosexual Marriage is Harmful and Must be Opposed, states, "We are conscious of the enormous difference between these individuals who struggle with their weakness and strive to overcome it and others who transform their sin into a reason for pride and try to impose their lifestyle on society as a whole, in flagrant opposition to traditional Christian morality and natural law."

In opposition to this, "We simply exercise our liberty as children of God (Rom. 8:21) and our constitutional rights to free speech and the candid, unapologetic and unashamed public display of our Catholic faith. We oppose arguments with arguments. To the arguments in favor of homosexuality and same-sex “marriage” we respond with arguments based on right reason, natural law and Divine Revelation."

God bless America and protect our great nation from the pro-homosexual dictatorship.

Male and female: No law of nature changed – just human beings who believe they are all powerful.  The whole world is in disarray who was it that said man challenging God's laws is like to a worm challenging a man.  You are fighting the good fight and we support you and are proud of you.  I am afraid the next generations will suffer much more than we are today.

I just watched your video of all of the violent protesters attacking you on the street corner.  I know you know that this is truly a spiritual battle that we are facing.   I just wanted to remind you to please dress in the full armor of GOD (Ephesians 6:11) before you do this and I would recommend blessing yourselves with exorcised holy water as well as wearing your blessed Benedictine medals for God's supernatural protection against these foul spirits that are on these people.

I would also suggest that you have some exorcised holy water on hand where you can easily sprinkle it on those who are attacking you as it will repel the demonic spirits!!!  God bless you and protect you for all you do!!

Thank you again for sending me petitions to stop all sorts of immoralities in the world and sending me news of the actions TFP has done. God will greatly reward everything that TFP has done. I am so inspired by the group and hope that no matter what difficulties, sufferings, and trials that come your way that you will be strong and continue to fight for the Faith. I understand how following the way of the Lord can be difficult, painful, and burdensome. Following the Lord's will is a path less followed but the few who choose the narrow, hard path do not need the support of thousands and millions of people but just the Lord to guide them along because He is enough.

I also would like to mention how my summer has been going and where I am headed, vocation-wise. This summer, I attended two retreats provided by the religious group I am involved with, Alliance of the Two Hearts (ATH).  The first retreat I went to allowed me to see the head spiritual director of the whole group, Father Edgardo "Bing" Arellano. He had a presentation for all present there and even showed a video of TFP's actions in protesting same-sex "marriage."

I am registered for the fall semester of my sophomore year in college but I don't know when the Lord will call me to fully serve Him. So please keep me in your prayers as TFP is in my prayers.

"Don't let anyone look down on you because you are young but set an example for the believers in speech, in life, in love, in faith, and in purity." - 1 Timothy 4:12