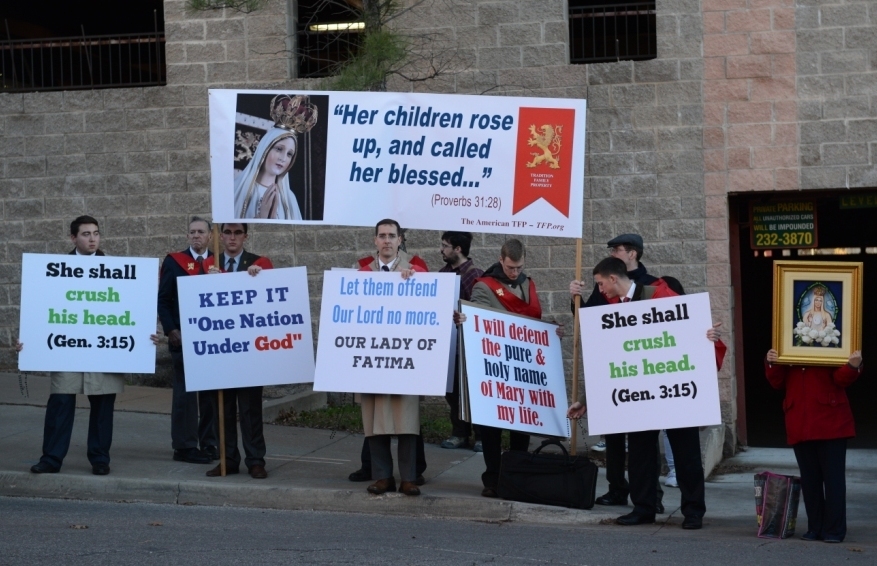 Faithful Catholics from several states gathered in front of City Hall in Oklahoma City on December 23 for a rosary rally of reparation organized by the American TFP and its America Needs Fatima campaign.  Demonstrators urged Mayor Mick Cornett to revoke the permit his office issued to a satanic group which desecrated a statue of the Virgin Mary on Christmas Eve in front of Saint Joseph Old Cathedral.

Showing their great love for God and His Blessed Mother, demonstrators recited the holy rosary and sang hymns such as Hail Holy Queen Enthroned Above, Immaculate Mary and God Bless America.  Dozens of banners and signs expressed the sentiments of rally participants.  "Revoke the permit -- Satan has no rights," read one sign.  Others stated:  "Keep it One Nation Under God," and "Sacrilege is not free speech" and "I will defend the pure & holy name of Mary with my life."

Kansas State Senator Steve Fitzgerald, who drove from Kansas to Oklahoma City with his wife for the rally, spoke eloquently about the urgent need to stand firm and defend Christian civilization -- like a new Battle of Lepanto -- against the attacks of darkness.  Francis Slobodnik, director of America Needs Fatima's national rosary rally office, addressed the assembly, saying, "We can't give the Holy Family any better gift at Christmas than to defend the honor of Our Lady. That is the greatest gift."

TFP Student Action volunteers held a large banner bearing a quote from Proverbs 31:28: "Her children rose up, and called her blessed."  And at the center of the reparation rally was a beautiful statue of Our Lady of Fatima, flanked by two TFP members in ceremonial habit.

Over 47,000 people called, signed petitions or wrote personal letters to halt this public attack against the Mother of God.

The following day at 3:45 pm, Christmas Eve, TFP volunteers and other faithful Catholics joined a peaceful and legal rosary rally of reparation organized by local activist David Homeney. It took place on the sidewalk across the street from St. Joseph’s Old Cathedral, mere feet from the spot where the Satanic sacrilege took place. Some parishioners of St. Joseph’s parked their RVs on the street adjacent to the planned spot, physically blocking the Satanists' view. Directly above the Satanists was a parking garage from which hung a giant cloth banner of Our Lady of Perpetual Help on the outside wall.

A local Knight of Columbus who joined the rosary of reparation revealed that his council had been told NOT to attend any public rally in defense of Our Lady.  But he felt he needed to attend anyway: “These things [the Satanic sacrilege] happen because Catholics do nothing,” he said.

At 4:15 PM, several Satanists showed up. Their leader, a convicted sex offender, was dressed in a mock Catholic cardinal’s cassock with Satanic symbols worn around his neck. After putting some cinderblocks on the sidewalk to serve as a pedestal, he brought out what appeared to be a statue of Our Lady of Lourdes and placed a rosary around the statue's neck.

The Satanists proceeded to cover the statue with a powdery substance and what appeared to be fake blood. With their hands and the statue covered in blood, they “prayed” an anti-rosary. The whole Satanic sacrilege lasted less than 30 minutes.

The group of 40 TFP volunteers and faithful Catholics from Arkansas, Oklahoma, Kansas, and Texas was predominately young and male, and they prayed Our Lady's Most Holy Rosary with masculine Catholic vigor. When the Satanists began their verbal attack against the Blessed Mother, the whole group of Catholic men increased the volume of the rosary in perfect unison, completely drowning out the Satanic blasphemies. The rally concluded with TFP volunteers singing the Marian hymn We Want God.

Public Satanism is on the rise in America. In 2014 Satanists tried and failed to organize a public black mass at Harvard University.  However, a public black mass was successfully held at the Oklahoma City Civic Center later that year.  Satanists recently inaugurated a statue to Satan in Detroit, Michigan.  Two months ago, a "church" dedicated to Lucifer opened in Spring, Texas.

CNN broadcasted a sympathetic documentary about the lives of Satanists and their practices, and many mainstream media outlets such as Time Magazine have published favorable articles about them.
The claim that the Satanists simply want attention is superficial and optimistic. Such an assertion implicitly denies that Satanic hatred exists or could exist. The hatred on display in Oklahoma City is not only real, but part of a broader trend, and with a specific purpose. It is the cutting edge of a cultural revolution that seeks to erode Americans’ horror for the occult and to banish Christianity from the public square.

Our Blessed Mother was publicly insulted. God was publicly offended. A public insult requires a public response and public reparation. If Catholics do not react to public insults against the Faith, they can invariably expect more frequent and more violent public attacks in the future.

The secular Left parrots the Satanists’ claim that their goal is simply to have all religions treated equally. This is a boldfaced lie. The Left ignores or even celebrates attacks against Christians, yet vigorously denounces attacks against, for example, Islam.

When someone left a severed pig’s head on the front step of a Philadelphia mosque, Mayor-elect Jim Kenney called on Philadelphians to “join me in rejecting this despicable act and supporting our Muslim neighbors... The bigotry that desecrated Al-Aqsa mosque today has no place in Philadelphia.” 1 The Oklahoma City sacrilege inspired no such indignation. “Secularism,” therefore, is merely political cover to support the persecution of Christianity while defending politically correct religions such as Islam or Satanism.

It is no coincidence that public Satanism is rising in tandem with homosexual “marriage” and abortion. The link between them is a strong one. Satanism and the anti-family movement share a delirious hatred for Catholic morality and God’s design for the family. Homosexuality is widely seen by Satanists as a “sacred” act, and many famous Satanists such as Alistair Crowley were homosexual. Former Satanist Zachary King, who performed satanic rituals inside abortion clinics, affirmed that Satanists see abortion as a type of “sacrament.” 2

Such diabolical hatred for God and the family, if not stopped, will lead to an outright religious persecution. This can already be seen thanks to court-ordered homosexual “marriage.” Americans faithful to Christian morality have suffered persecution and even jail time due to their beliefs. Public Satanism will contribute to ever more public hatred for Christianity -- especially against the Catholic Church.

Every violent crackdown on Catholicism – from the Roman persecutions to the French Revolution, Cristero War, and the Spanish Civil War – was contemporaneous with a propaganda campaign of mockery and derision for Catholic beliefs, the Saints, the Seven Sacraments, and the Holy Mass. Such all-consuming hatred for the Catholic Church did not then, and will not now, remain in the form of desecrated statues and blasphemous plays. Like so many other times in Catholic history, if Catholics don’t react, it may spill over into violence. Catholics may once again be thrown in jail and Churches may be burned down by angry mobs thanks to the tacit support of the “neutral” state.  Unless denounced and rejected by the majority of Americans, the sacrilege in Oklahoma City is a harbinger of violent persecution.

We must pray and act so that America will fend off this new form of religious persecution and legally and peacefully fight to truly be "one nation under God."