For over twenty years, pacifist protesters have gathered at Fort Benning in mid-November to oppose the activities of the Western Hemisphere Institute for Security Cooperation (formerly called the School of the Americas) and demand its closure. The protesters are even invited to break the law and trespass upon the military base as a symbolic act.

The annual event is organized by the School of the Americas Watch (SOA Watch). This year, the organization has admitted that they will be attracting a dwindling mix of protesters since many activists are “busy” in the Occupy Wall Street movement nationwide.  These socialist advocates surprisingly claim to represent “99%” of the American people.

In fact, this year’s march is also being called Occupy Fort Benning. Like their comrades in the Occupy Wall Street movement, the activists say they speak in the name of the “99%.” We ask: Who do they really represent?

They do not represent the American people

Not only does the American soldier wish to defend our nation, but he also extends an invitation to those in other countries, to learn from his experiences, and come to Fort Benning to better defend their countries against brutal Marxist movements.

To insinuate that a three or six-month course (where the curriculum is no secret) can turn South American soldiers into assassins is an insult to all these brave soldiers and their instructors. The whole school cannot be judged by deplorable acts of some of its graduates. It would be the equivalent of saying the Occupy Wall Street movement turns all its squatting occupants into criminals because of the increasing number of criminal opportunists who are appearing at “occupy” sites nationwide and committing crimes and sexual assaults that have led to a number of arrests.

By defending the whole nation, the American soldier represents 100% of all Americans. By dividing the nation, Occupy Fort Benning seeks to represent only those Americans sympathetic to its radical view.

Thus we must ask: Who do they really represent?

Looking at all the groups that usually attend the protest, we see scattered fringes of the religious, political and cultural left.  The event is used as a platform to push ideas that range from communism to socialism, drug legalization to abortion, homosexual vice to women’s ordination, Liberation Theology to anarchy. Realistically, even the most optimistic observer is forced to admit that such views represent at best only 0.99% of Americans rather than 99%.

They do not represent the Church

Although participants may appear in habits and collars, it would be wrong to conclude that these protesters represent the authentic position of the Catholic Church. The strident socialist tone of the arguments presented by the protesters remind us of the words of Pope Pius XI who warned, “No one can be at the same time a good Catholic and a true socialist.”

The praising of Marxist guerillas and despots like Che Guevara and Fidel Castro who promoted violent revolution in Latin America obviously does not represent Church teaching. Indeed, while the Western Hemisphere Institute for Security Cooperation opens its doors to all democratically elected governments in the hemisphere, the protesters have the dubious distinction of favoring the oldest communist dictatorship in Latin America – the Castro dictatorship which has held sway for over fifty years and persecuted the Church.

The idea that protesters somehow represent Church teaching is refuted by the excommunication of Maryknoll Father Roy Bourgeois who has led the gathering for over two decades. His public support of women’s ordination and persistent dissent has set him at loggerheads with both the Vatican and his religious order.

Indeed, the Fathers and great saints of the Church consistently defend the mission of the soldier to establish order through just war. Saint Thomas Aquinas teaches, for example, that the military profession must have as its goal the defense of the public good, the poor and oppressed. Soldiers are therefore guardians of legitimate authority.

Yet again, in his role of upholding the Church’s teaching on just war, the soldier represents the full 100% while the Occupy Fort Benning activists represent at best a dissenting 0.99 % element that does not reflect the teachings of the Fathers of the Church.

A Call to Gratitude

The American Society for the Defense of Tradition, Family and Property (TFP) calls upon the public to thank our heroes.  Let us thank them for defending the 100%.

Indeed, we need to thank – not protest – these heroes who put their lives on the line – and represent us all. These heroes guarantee the peace. We live freely because they made the greatest of sacrifices – even that of life itself.

While we censure any abuses, of course, we will not stand silent while systemic and widespread abuses come from Castro’s Cuba, the FARC guerillas and other leftist movements that still cling to the outdated and iniquitous Marxist ideologies that so ravaged Latin America.

As Americans, let us be proud of these heroes who represent us all as they continue to fight and train others to defend their nations against those who threaten the peace.

May God protect them and their families in their daily battles around the world. 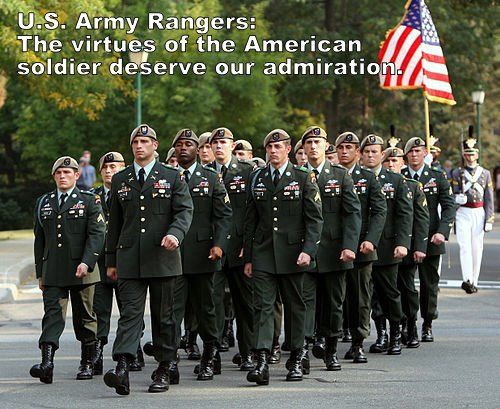