With the guitar hanging around his neck and the microphone in his hand, Elvis Presley is shown in the photo singing and dancing before a frenzied public.

In man, the intelligence ought to direct the will, and both of them should in turn enlighten the sensibility, guiding it and supporting it to the extent that is required by the weakness proper to it. Where the human faculties (intelligence, will, and sensibility) are concerned, it is precisely the sensibility that is most frequently in disorder, crisis and confusion.

On the contrary, everything about the bearing, gestures, and physiognomy of this poor, young man indicates the total unchaining of the sensibility so as to bring the will entirely in subjection to it. To allow the intelligence and will to be directed by the sensibility is to reverse the natural metaphysical order of the soul and to produce chaos. Accordingly, the unleashing of the sensibility in the performer causes movements in which one absolutely does not find any equilibrium, good sense or composure, all of which are inherent to the directive action of the intelligence.

In the present case, we are not even considering the hypertrophy of the sensibilities. Undoubtedly, their excessive emotionality in relation to certain artistic, political, social or literary matters, or in face of certain personal situations such as orphanhood, widowhood, or loneliness, etc., was censurable. It was an error without a doubt, and a grave one, which produced in the history of Western culture tragic consequences, but it was an error which at least still presupposed a truth, that is, that the sentiment is one of the integral elements of the intellectual process.

Here, on the other hand, there is a mere vibration of nerves, of nerves which are ill and over excited and which vibrate without any reason, without any point of departure and without any objective other than the morbid pleasure of vibrating and whose frenzy in its turn calls forth continuously greater vibrations. In this way, one arrives rapidly at extreme manifestations, delirious rhythms, disorderly gestures, contorted expressions of the face, and finally a total of disorders typical of those who according to the incisive expression of Dante “have lost the light of the intellect.”

In short, if a drunkard were to sing and dance, he would do it in an agonizing way like this. And this contagious drunkenness, which spreads like a new Saint Vitus's dance to millions of person, is much more dangerous than that of alcohol because it indicates a fundamental disorder in the soul which does not pass away like the effects of wine. Such rock-and-roll singers by putting millions in delirium have helped to make the light of reason wane in the general public and have stimulated the growth of hippyism which passes easily into nudism, arbitrary terror and Satanism. 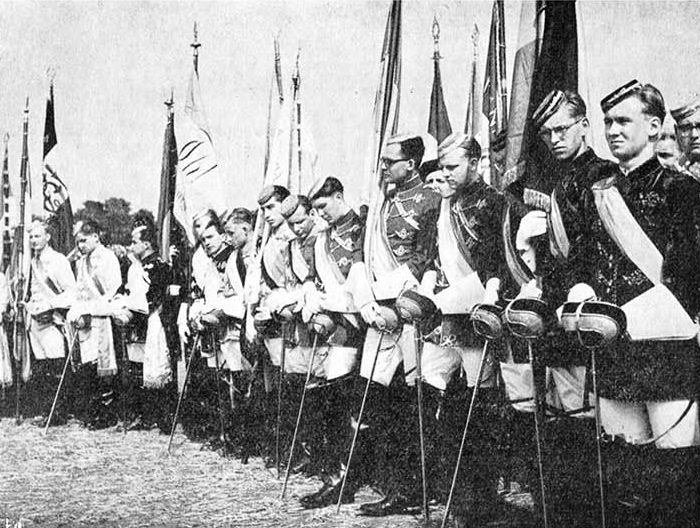 German Catholic students at the Katholikentag of 1954

Below the photograph of this lamentable manifestation of the interior indiscipline of so many youths of our day, the German Catholic students who participated in the Katholikentag of 1954 present a shining contrast, as shown in the photo at the lower left, and are for us a fine standard and beautiful example of youth.

These youths embody the bygone ideals of chivalry and heroism, timeless values needed for their modern-day counterparts.

The countenances here express the habit of concentration and study, created by a profoundly serious intellectual formation beginning in the primary school. There is a physical vigor resulting from the training of the body, contained within its just limits, and without the exaggeration of “sportism” so frequent among us. The frame has a bearing from which every kind of softness is excluded and which makes us see in these young men not only future intellectuals but also men disposed for action and combat.

The traditional attire of these German students corresponds completely to this concept of youth. On one hand, their clothing is multicolored, cheerful, varied and practical as is suitable for young men. On the other hand, it has the distinction proper to students who know to respect themselves and the things of the spirit to which they dedicate themselves. The sword medievally reminiscent of the heroic combat, adds a note of militant idealism, and simultaneously perpetuates the tradition of fencing, the intellectual sport par excellence since it is admirably apt in forming attention, astuteness, initiative, and panache at the same time that it puts the whole body into action. In this picture, everything makes one think of the great truth enunciated by Claudel: “Youth was not made for pleasure, but for heroism.” In contrast, everything in the first picture seems to say to us that youth was not made for heroism but for pleasure — or worse yet, for sensuality.

(*) This article was originally published in the magazine Catolicismo, Issue #72, December 1956. It has been translated and adapted for publication without the author's revision. –Ed.