The United Nations is the keystone of today's world. Its buildings should, therefore, express their high function by the majesty of their lines and proportions.

Our photo shows the U.N. Secretariat building. Despite its enormous dimensions, we would hesitate to call it a palace. It is certainly immense, most expensive and overwhelming, but its lines are as commonplace as those of a matchbox; they are monotonous, uniform and harsh, like those of a prison. Its air is somber, like that of a Gestapo or KGB headquarters. Everything about this immense box of concrete, steel and glass seems calculated to make man feel like he is nothing more than an ant, a grain of sand, an atom. 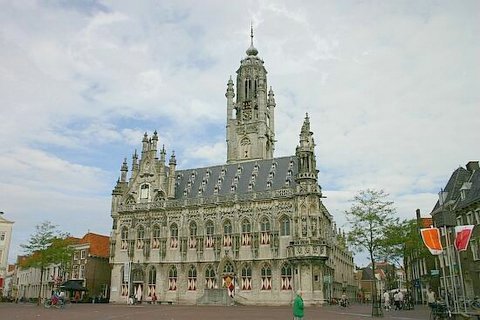 Middelburg is a small Dutch city that built its town hall in the fifteenth century. How can this building compare in size with that of the United Nations? Yet we would not hesitate to call it a palace: The nobility of its lines does not allow one to give it another name.

(*) This article was originally published in the magazine Catolicismo, Issue #7, July 1951. It has been translated and adapted for publication without the author's revision. –Ed.