France, otherwise known as the first-born daughter of the Church, is the home of magnificent testimonies of Christian Civilization that inspire awe and admiration. Among the many fruits brought forth from this civilization are a multitude of cathedrals and monuments that bring Heaven closer to earth and nudge us to marvel and contemplate. Each masterpiece represents a facet of God’s infinite grandeur.

The Largest Cathedral in France

Notre-Dame d’Amiens in Picardy, France, 75 miles north of Paris, sits on a ridge that overlooks the Somme River. Unlike other cathedrals, Notre-Dame d’Amiens was built within a short time, between 1220 and 1270, and displays a unique unity of style. The cathedral typifies the high gothic style, with early hints of the later Rayonnant style, which favors spatial structures and large stained glass windows that capture light, a beautiful symbol of the light of Christ that fills the Christian soul.

The cathedral’s magnificent flying buttresses support its upper walls, allowing them to soar tall and accommodate the stained glass windows that depict Our Lord, Our Lady, the saints, prophets, angles, and medieval imagery.

The scene of the Last Judgement carved into the central portal is impressive. It depicts Our Lord, with hands raised, judging those below Him, while Our Lady and Saint John pray and appeal to God to have mercy on those whom He judges. It also illustrates the overwhelming joy of the souls of the just who are escorted to Heaven. In stark contrast, the souls of the reprobate, filled with fear, are marched to Hell.

Two bell towers on the west façade catch your attention. The south tower, built in 1366, is the shorter of the two and reflects the architecture of its time. The more prominent north tower, completed in 1406, shows more advanced stonework complexity. What a testimony to the astounding progress made by medieval man in a short time span.

A salient feature of the cathedral is Le Beau Dieu d’Amiens, a majestic statue of Our Lord located in the central portal of the west façade under the scene of the Last Judgement. 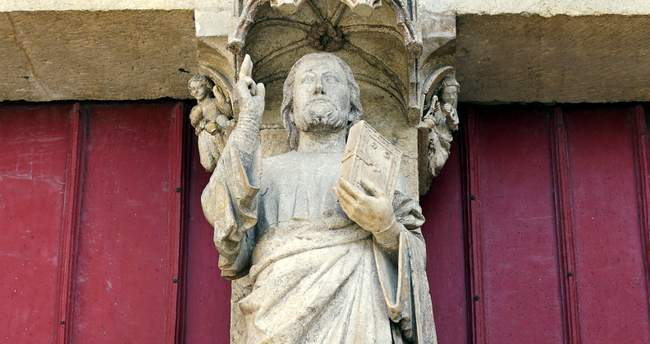 “In Our Lord Jesus Christ, the perfection of human nature is elevated to a degree superior to itself through the Hypostatic Union with the Divine nature,” Prof. Corrêa de Oliveira wrote.

“In Our Lord Jesus Christ all the human virtues are present harmonically and supremely. They build upon each other in a perfect way, revealing, as the lamp shade reveals the light, the Divine Perfection itself, the God-Man. A society committed to assimilating what could be called the human type of Our Lord Jesus Christ will continuously rise toward perfection. In this lies all genuine progress.”

The Medieval soul had a profound understanding and love for symbolism. With this in mind, the cathedral’s exterior reflects the physical side of man, which in turn reflects the interior soul that lives in close union with God and His Holy Mother. This explains the Church’s magnificence: God made our soul and fills it with His grace, through the mediation of the Queen of Heaven and Earth. 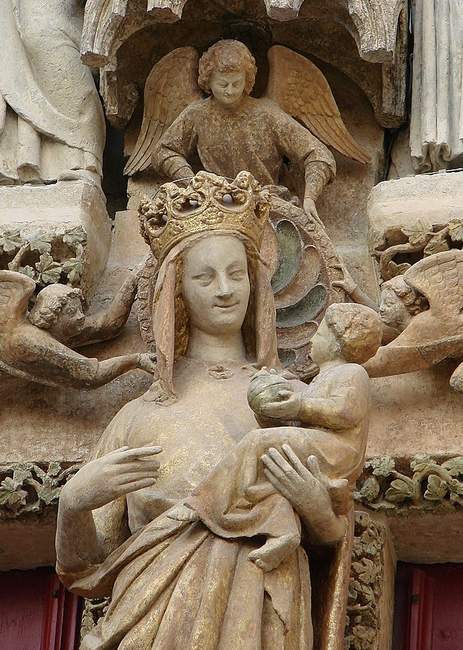 Entering the cathedral, you immediately sense grandeur and elevation of spirit. The high vaulted ceilings and the large stained glass windows transmit a heavenly scene full of light, beauty, and majesty.

Your gaze is lifted, and the nave has an imponderable depth that invites you to approach the altar. Before reaching the altar, however, you walk by the medieval choir stalls that depict more than 4,000 figures of the Old and New Testament; all of these figures are unique. The altar depicts angels surrounding the Holy Ghost, as golden beams of light radiate outwards like the penetrating rays of the sun. Behind the altar is a hall of stained glass windows that fill the space with light and color.

The floor of the nave features a labyrinth. The labyrinth symbolizes the many unexpected twists, turns, and obstacles that confront man throughout life on earth. On feast days, pilgrims will follow the labyrinth on their knees, acknowledging that they too are on their earthly journey and will eventually pass through the threshold of eternity.

Oxygen for the Soul

Although the Middle Ages has long passed, its sacral spirit remains, providing oxygen for the soul. Indeed, the great Cathedrals are a testimony to the holy men who built them for God’s glory. This enduring medieval spirit is wholly opposed to the cult of ugliness flaunted by modern-day counterfeits that pass for churches nowadays.

Cathedrals like Notre-Dame d’Amiens are marvels of the Catholic Faith. They help us understand God and prepare our souls to reach our final destination: Heaven.

Can you help out with a gift?