The famous battle for the Alamo revolved around the mission Church of San Antonio de Valero.  The historic building still stands and is the most visited place in Texas, a perfect location to hold a TFP campaign for marriage and collect pro-family petitions to Pope Francis ahead of the upcoming Synod on the Family.

Over the last two days, on every sidewalk near the Alamo, TFP volunteers engaged in conversation about the need to defend true marriage and moral values. "We were just married yesterday!" said one young couple joyfully. "Of course we'll sign. Actually, this will be the first time we sign something as a married couple!"

For the next four hours, visitors snapped photos of the TFP banners and asked to be photographed standing next to our bagpipers and drummer.

As a group of people were reaching for clipboards to sign the petition, a young woman screamed in a loud voice, "Don't sign their petition.  It's anti-LBGT."  But her yelling had little to no impact and people continued to sign.

A group of Boy Scouts declined to sign the pro-family petition. "We stay neutral," they said.  "Really?" replied TFP member Evan Olwell. "That's not what I've been hearing lately in the news."  Somewhat confused, they said, "Well... We'll leave it at that."

A man walking down the same sidewalk overheard part of the conversation and could not resist lamenting the Boy Scouts' moral surrender to the homosexual agenda.  Chiming in, he said:  "Don't bother, the Boy Scouts are now man-girl scouts."

At the Alamo, hundreds of Catholics and non-Catholics agreed that the homosexual movement is not only destroying the family, but the moral fabric of society.  That's why they didn't need to be convinced to sign the petition to Pope Francis which prayerfully asks the Holy Father to reaffirm 2,000 years of Church teaching on marriage and family.  Thus far, more than 440,000 people have signed the petition, including 5 cardinals and 105 bishops.

"I've seen some priests trying to change people's minds on the issue," stated a Catholic father who was with his wife and children, "but we know that same-sex 'marriage' is wrong because it's against morality." 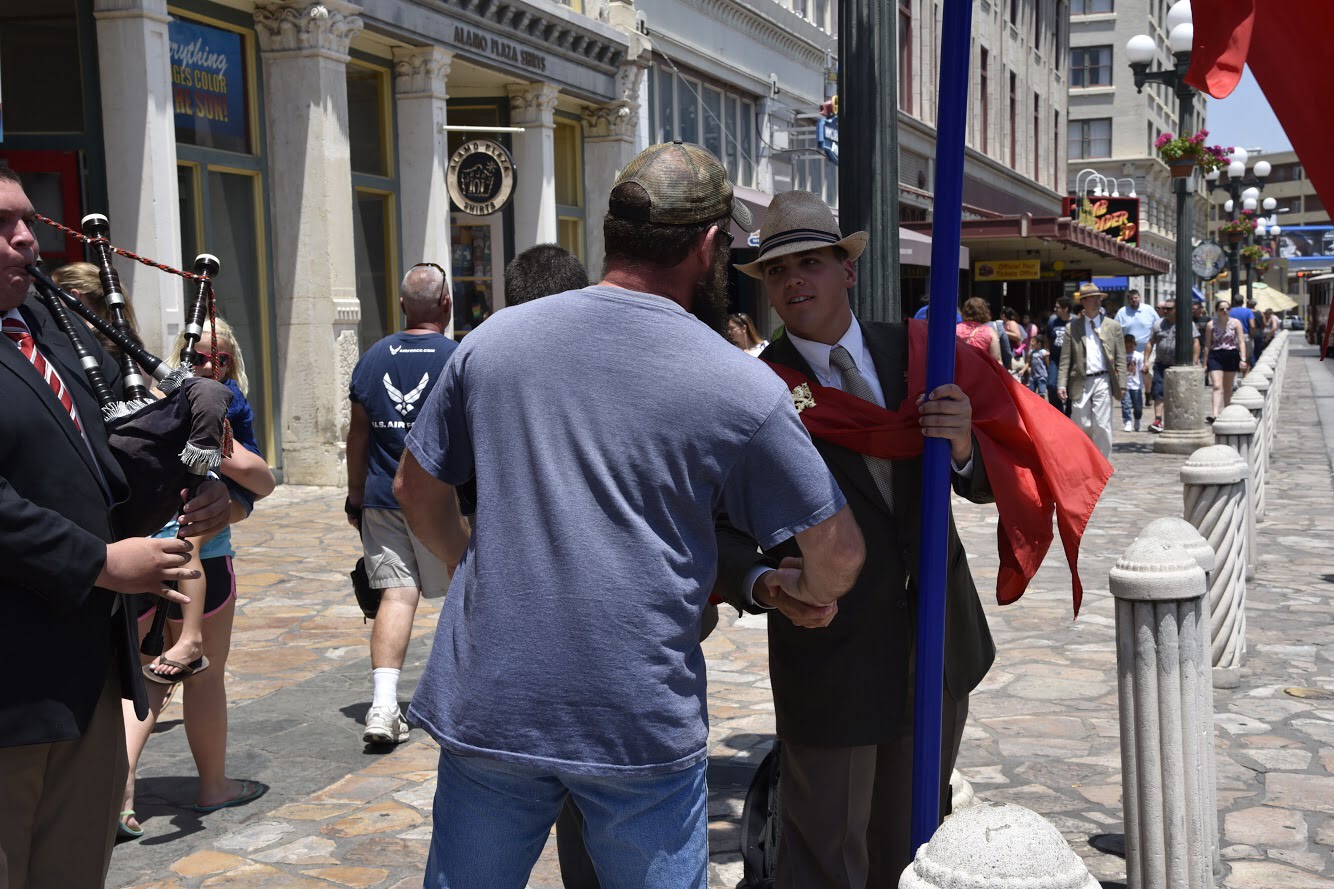 Some reactions took us by surprise.  One young lady, heavily tattooed and immodestly dressed, said: "What you're doing is so important, thank you."

Another woman, after signing the petition, said to the TFP volunteers:  "You are Angels from heaven."

Another man approached and had numerous questions about Catholic doctrine. After speaking with a TFP volunteer at length, he expressed a desire to speak with a priest.

As we finished our final prayer in front of the Alamo, a young couple applauded with enthusiasm.  "When I heard you praying the Hail Mary, I got goose bumps," said the husband.  "If I had known you were here, I would have joined you in prayer.  I'm preparing to make my consecration to Mary."  He gave us his information and asked us to call him whenever we go to his area of Texas.

Please pray for this campaign as we push on to other cities.  The sun and heat can be tiring, but we're staying well hydrated.  We are drinking about 90 bottles of water a day.  More importantly, everyone's spirits are high and willing to suffer and face the challenges of heat and discomfort for the sake of such a noble cause.

As the crusaders of old would say, "Deus vult!" (God wills it.)  In that same spirit, we repeat with them, "Deus vult!"

Until next report, keep the prayers coming.  Thank you!

Some people need to hear a word and others need to open or re open their eyes. Many are blind to what is going on, what has happened, and what may come to happen.-- Irasema Soto, Amarillo, Texas, USA

Absolute support from the other side of the world (New Zealand).  For us you are an international example of morality practiced by youth. Good luck.-- email from New Zealand

Seeing young people, male in particular, involved in these issues makes a powerful impact.  It shows a caring and respectful attitude which many young men nowadays lack.  Keep doing what you are doing. You are the face of the Catholic youth.-- Marian Solon, Michigan, USA

I just recently learned about you because my grandson is currently on tour with your group. Our present state of this country is something I never thought I'd see in my lifetime. It deeply distresses me to see things that have and continue to take place such as same-sex "marriage," the legalization of marijuana, and the current abhorrent Planned Parenthood videos about selling fetal tissue.  God bless all of you.

TFP Student Action is a leading voice of right reason.