The homosexual movement is subverting moral values at a growing number of Catholic universities and colleges in America, according to a detailed TFP Student Action report published on May 13, 2016.

The 56-page report can be accessed here:

The report lists 130 universities and colleges that recognize pro-homosexual clubs and activities, together with the names of those clubs, beginning on page eleven.  It also informs and alerts fellow Catholics —especially students and parents— about the profound moral crisis shaking Catholic higher education.

"The antidote to the Sexual Revolution —especially on Catholic campuses— is the angelic virtue, the forgotten virtue of purity," the report reads.  "In order to truly regenerate our culture, there must be a robust response capable of defeating the slavery of sin; that is, a bold and unapologetic Crusade for purity.  The more our culture sinks into the swamp of impurity, the more urgent this crusade of purity becomes."

To stop pro-homosexual activities on Catholic campuses, TFP Student Action is working to collect 25,000 petitions, urging the presidents and leaders of Catholic universities and colleges to uphold authentic Catholic doctrine.  It is time to correct the scandal and discontinue pro-homosexual clubs and activities on 130 campuses.

1. Sign your peaceful and prayerful protest online HERE.(You don’t need to be a student to sign. Everyone can join.)

Help this campaign for moral values snowball by inviting your friends to participate.  Use email, Facebook and others ways to share this report. The trend is troubling. 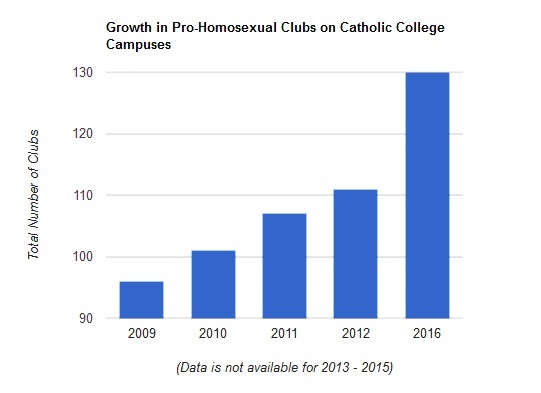