Hundreds of thousands from around the nation gathered for the 40th March for Life in Washington, D.C. on Friday, January 25.  The yearly event commemorates the anniversary of the infamous Roe v. Wade decision which legalized abortion on demand.

Despite the freezing conditions and snow, an immense crowd could be seen in all directions, composed mostly of young people full of enthusiasm for the cause of the unborn and the future of the family.  A veritable sea of banners and signs from groups around the nation blanketed the National Mall as the opening rally began Friday afternoon.

As the massive sea of humanity made its way up Capitol Hill to the steps of the Supreme Court, members of the American Society for the Defense of Tradition, Family, and Property (TFP) marched with red standards flying, and the ever-popular marching band, complete with brass, bagpipes and drums to encourage the crowd.  International delegations of sister TFPs from Belgium, Germany and Italy joined the march.

The events of the day were a tribute to the life of Miss Nellie Gray, foundress of the March for Life, underscoring the need for new leaders in the fight against the sin of abortion, as well as renewed perseverance and confidence in this noble struggle.

This year’s March comes amid a flurry of pro-life activity around the country, including a remarkable upswing of well attended local marches from coast to coast.

This year’s March comes amid a flurry of pro-life activity around the country, including a remarkable upswing of well attended local marches from coast to coast. 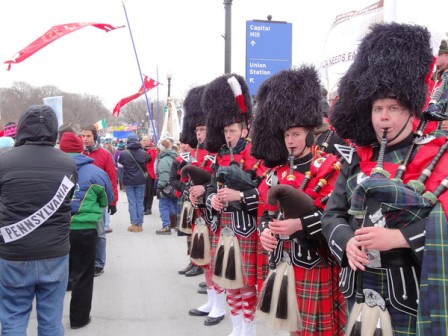 Two weeks prior to the March, the leadership of Planned Parenthood, America’s largest abortion provider, announced they would no longer be using the term ‘pro-choice.’  Americans today rightly see pro-choice as being pro-abortion, contrasting with the growing number of Americans, especially youth, who reject the sin of abortion and identify themselves as pro-life.

This news comes as a growing number of states have succeeded in defunding Planned Parenthood. Ten states have successfully ended funding for the abortion giant, with many more plans to do so in other states during the legislative sessions of 2013. The amount of taxpayer dollars from the above mentioned states alone which are no longer going to fund abortion amounts to more than $60 million.

As pro-life efforts in states around the nation meet with increasing success, one columnist went so far as to label 2012 a ‘disaster for abortion rights.’  The cover story for the January 14 issue of Time Magazine, no friend of the right to life cause, published the very telling headline:

“40 years ago, abortion-rights activists won an epic victory with Roe vs. Wade. They’ve been losing ever since.”

All of this coincides with the resignation of Nancy Keenan, president of NARAL Pro-Choice America. The main reason Keenan gave for stepping down from her position, reports The Washington Post, was a lack of young pro-abortion activists. This reiterates what many in the pro-life movement have known for a long time: aging pro-abortion activists are trying to force the sin of abortion on a generation that is increasingly rejecting it.

Saint Michael the Archangel: Angelic Chivalry to Lead the Fight

Members of the American TFP and its America Needs Fatima campaign were out in force at this year’s March to distribute a flyer titled “Saint Michael the Archangel and the Pro-Life Victory.” This flyer was warmly received, with thousands and thousands handed out over the course of the day. Many intended to take advantage of the attached offer for a free St. Michael Chaplet.

As America is threatened by enemies both internal and external, we know the great battle before us cannot be won by mere human efforts. Devotion to Saint Michael in the highest degree will ensure victory not just in the fight against abortion, but in the battle for America’s soul, the spiritual combat of the 21st century. As the forces of darkness increase their efforts to destroy all that remains of good in America, let us increase our confidence all the more in the certain victory of the Prince of the Heavenly Armies.

As this 40th March for Life falls on the Feast of the Conversion of Saint Paul the Apostle, let us pray that America become like a new Saint Paul, zealously fighting all the errors she has promoted, and the instrument of extraordinary grace in the restoration of Christian civilization.