While dedicated pro-lifers work to save babies, St. Norbert College will be doing something oddly different:  welcoming radical pro-abortionist Gloria Steinem to speak on campus.  The talk is scheduled on April 21, according to a news release issued by the college.

Given that St. Norbert College in De Pere, Wisconsin is a Catholic institution, the invitation is causing confusion and scandal.  Pro-life students and alumni are deeply troubled by the decision which, if not canceled, will give a Catholic platform to a notorious activist who publicaly promotes the killing of innocent children.

Gloria Steinem and abortion:  In a 2011 interview with Abortion Review, she boasted about her own abortion at age 22, saying: "...it felt positive."

“It [abortion] is supposed to make us a bad person. But I must say, I never felt that. I used to sit and try and figure out how old the child would be, trying to make myself feel guilty. But I never could! I think the person who said: ‘Honey, if men could get pregnant, abortion would be a sacrament’ was right."

On another occasion, speaking at a pro-abortion fundraiser for Planned Parenthood, Steinem said:  “There is no organization in this country or the world that is more important than Planned Parenthood.”(NJ.com, Sept. 17, 2011)

More recently, she stated: "Approximately one in three women in this country needs an abortion at some time in her life. It should be a part of reproductive rights." (The Washington Post, Nov. 19, 2013)

Gloria Steinem and same-sex "marriage":  In addition to actively supporting the Human Rights Campaign, the Los Angeles Times printed this: "Gloria Steinem called the fight for same-sex marriage inseparable from the pro-choice and feminist movement. 'We are talking about the right of all individuals to form committed, loving, nurturing relationships,' she said." (Los Angeles Times, June 17, 1996)

Gloria Steinem and feminism:  "Steinem's debut issue of Ms. Magazine immediately went to work pushing abortion as the issue at the heart of the women's movement.  It featured fifty-three well-known U.S. women declaring they had undergone abortions despite state laws against the procedure.... To rally her feminist troops back in the heyday of women's 'liberation,' she insisted: 'We don't just want to destroy capitalism, we want to tear down the whole f---ing patriarchy.'" (American Thinker, Nov. 22, 2013)

Gloria Steinem and religion:  "Religion is politics in the sky. When God looks like the ruling class, we’re in deep (expletive)." (Ms Magazine, Sept. 29, 2010)

Gloria Steinem and Marxism:  "When I was in college, it was the McCarthy era," she said in a 1997 interview with Susan Mitchell, "and that made me a Marxist." Steinem is currently listed as an honorary chair member of the Democratic Socialists of America.  Earlier in her feminist career, a photo of Steinem at her desk shows a poster of ruthless communist terrorist Ernesto Che Guevara on display in her office.
How on earth can a woman like Gloria Steinem who has such a public pro-abortion and anti-Catholic record be invited to give a lecture at a Catholic institute, which ought to be a cornerstone in the defense of innocent life and moral values?

Help Cancel Gloria Steinem's Talk
TFP Student Action invites you and all its readers to call for the immediate cancelation of Gloria Steinem's talk at St. Norbert College.  The Culture of Death must not be promoted on any Catholic campus.  Nor should any pro-abortion activists be given a platform to spread falsehood and further undermine the precious moral teaching of the Holy Catholic Church.

"I find the invitation to have Ms. Gloria Steinem speak at St. Norbert College to be offensive on many levels," said St. Norbert College aluma Andrea Erickson.  "The work and writings of Ms. Steinem are antithetical to the moral teachings of the Catholic Church: to uphold the most basic right of all humans -- the right to life; and to uphold the dignity of the Sacrament of Marriage between one man and one woman.  The beauty of the Catholic Church’s moral teachings is that they are the same yesterday, today and forever more."

This issue is not about academic freedom.

This issue is all about being faithful to God.  About being true to our baptismal vows.  About having the moral courage to reverse one of the worst scourges that ever hit American society: 55 million surgical abortions, 55 million mortal sins, 55 million innocent lives snuffed out in the name of "choice."

The unborn depend on you and your voice.  Stand up for the truth. 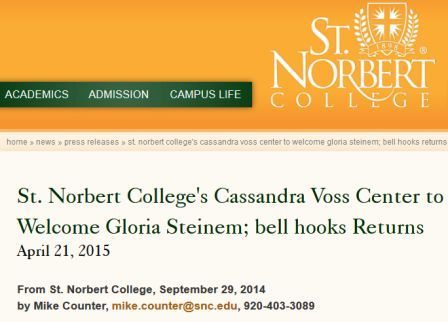 As a defender of innocent life, I respectfully urge you to cancel Gloria Steinem's talk at St. Norbert College on April 21, 2015. She is a public and notorious pro-abortion activist who attacks Church teaching and should not be given a Catholic platform.