Preparations for the "Seattle University Drag Show" are underway, according to the Catholic institution's web site.  The March 14 event will be the 8th "drag show" on this campus which has thus distanced itself from the ideals of St. Ignatius of Loyola yet still considers itself a Catholic university.

The event is promoted by the pro-homosexual Triangle Club.  Previous "drag shows" encouraged students to show up in "drag" for the event, and featured "professional drag queens" (men dressed as women) and "student performers." 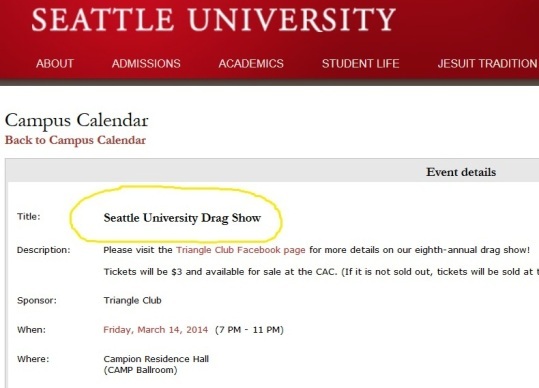 "As people become more and more accepting of the gay community, the term 'freak' is finally fading into the past, and drag has become a recognized and respected artform."

Drag shows are a notorious symbol of moral depravity, part of the sexual revolution apparatus.  In these times, one might expect to find such things on the infamous stages of Broadway or the godless sets of Hollywood. But at a Catholic university?

There are other reasons for concern.  Seattle University's Office of Multicultural Affairs promotes "LGBT Programs and Services" on its web site which offers "LGBT Training," described in these terms:"

... we encourage students, staff, and faculty to continue to receive trainings, read recommended readings on LGBTQ experiences, and include other signifiers (rainbow flags), integrate LGBTQ history, writers, artists in your curriculum, integrate LGBTQ-inclusive and non-gendered language in your teaching/ presenting, and constantly create the safest spaces you can for all.)"

The training program titles speak for themselves:

What about Catholic moral teaching?

What does Catholic signify to Seattle University?  An empty title devoid of moral principles rather than a way of life instituted by Our Lord Himself?  What other conclusion can one draw in the face of this Jesuit university’s latest transgression against its Catholic identity?

If Seattle University wishes to live up to both its Jesuit tradition, and its Catholic identity, this is the time for them to show it by publically condemning the drag show event, apologizing for having allowed the scandal multiple times, and banishing it forever.

I am appalled Seattle University plans to host a pro-homosexual "drag show" on March 14, 2014. I respectfully urge you to cancel it and avoid further public scandal.