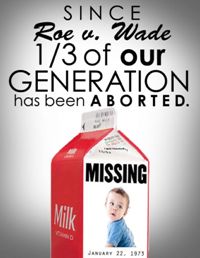 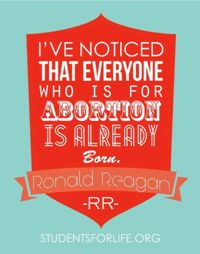 Wilson High School has received a letter from the Thomas More Society, a Chicago-based public interest law firm, demanding that the school end its discriminatory treatment of a pro-life student group. Wilson Students for Life, an affiliate of Students for Life of America, was established in the fall of 2013 by freshman Bryce Asberg to "loudly proclaim the pro-life message." Since its founding, the group has faced constant hostility from the school's administration, such as forbidding the group to hang its posters or host certain events, while other student groups have faced no similar restrictions. The school has until February 25 to respond to Thomas More Society's demand to end its hostility towards Wilson Students for Life, discrimination which violates the federal Equal Access Act.

Help us by sharing
our work for moral values

"Public schools have a duty to treat all student groups equally," said Peter Breen, Vice President and Senior Counsel of the Thomas More Society. "Wilson High School's current policy allows administrators to censor any messages they deem 'offensive' -- in this case, any pro-life message -- while allowing other groups broad freedom of speech. The administration is violating the rights of the students involved in Wilson Students for Life, who do not lose their constitutionally protected freedom of speech when they enter the schoolhouse door."

Asberg's group selected two posters from the Students for Life of America website to promote its club. In compliance with school procedures, they asked the administration's permission to hang these posters. The first read "Since Roe v. Wade 1/3 of our generation has been aborted" with a picture of a milk carton and the word "missing" above the photo of a baby. The second poster bears a quote from President Ronald Reagan, "I've noticed that everyone who is for abortion is already born."

Despite this policy, however, the administration has permitted the Wilson Gay Straight Alliance to hang flyers, for example, promoting homosexual relationships by showing conjoined male symbols and conjoined female symbols and stating, "Love knows no limits." 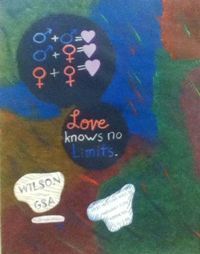 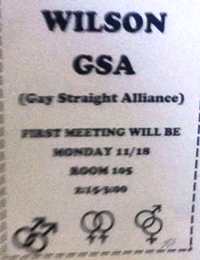 After the administration's denial of Wilson Students for Life's posters, school administrators met with Asberg and the other Wilson Students for Life leaders to "give them advice" on how to best run their club. Asberg said he left the meeting feeling like his group was encouraged to only host events after school, while other groups were allowed to do what they wanted during the school day. For example, while the Gay Straight Alliance is permitted to hold a "Day of Silence" during the school day, the pro-life club was discouraged from doing so, as their identical event would be "too controversial.

The Wilson High School administration cannot be allowed to trample on the constitutional rights of Wilson Students for Life," said Kristan Hawkins, President of Students for Life of America.

"Our pro-life students will not accept their right to free speech being taken away. Sadly, this case shows that viewpoint discrimination is alive and well in today's schools and that administrators think they can still get away with it. Students for Life of America is proud to stand with Wilson Students for Life to demand that the Wilson High School administration reverse their unjust decision."

To leave a message of support and encouragement for Bryce Asberg and his group, the Wilson Students for Life, just submit them at the bottom of this post in the comments section.

I am appalled with the unjust censorship of the Wilson Students for Life. I respectfully urge you to issue an apology and restore the group's full freedom of speech to defend the unborn at school.