Vatican letter calls it a "scandal"

According to recent reports, the Vatican Congregation for Education sent a letter to concerned lay Catholics in San Diego, California, who filed a canonical petition with Church authorities in Rome, asking for an intervention.  The letter was received by Catholic attorney, Charles LiMandri, alumni and past President of the USD Alumni Association and Thomas McKenna, head of Catholic Action for Faith and Family.

The Vatican letter states:  "In view of the gravity of the case, it is worth mentioning that in light of the show and the scandal that it caused, this congregation intends to act through administrative channels to the competent ecclesiastical authority in San Diego."

So far, however, the 2014 "Supreme Drag" remains scheduled.  And if it resembles previous ones, students will be exposed to behavior that not only undermines Catholic morality but deliberately attacks the God-made distinction between male and female.

At last year's show, for example, a man calling himself a "Sister of Perpetual Indulgence" attended the event dressed up to look like a traditional Catholic nun -- in full "habit" -- just to mock the Faith, belittle the religious life and attack everything sacred. 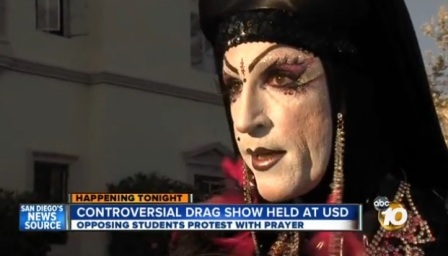 "Sister of Perpetual Indulgence" mocks the Faith at USD in 2013.

How can any true Catholic university allow such offensive behavior?

This is how one Catholic student at the University of San Diego describes what he saw:

The event felt more like an underhanded attempt at indoctrination than anything else. This feeling was furthered by the banning of video, photography, and audio recording, which came across as a desire for secrecy.  Even worse, the hosts of the event sought to encourage the performers as well as the audience, referring to them as “revolutionaries,” to take a more active role in making DRAG, homosexuality, and transgender identity an acceptable part of the campus.

Some of the suggestions, which resulted were gender neutral bathrooms, an increase in DRAG related events, and gay pride parades. It became rather clear over the course of the two and a half hours, that the event was less about acceptance and more about an open rebellion against Catholic values. Make no mistake, this event fostered sinful behaviors and set the stage for more in the future.

For the administration of a Catholic University to take part in this scandal came across as a betrayal, not only a betrayal of the Church but also a betrayal of every devout Catholic student who attends USD.

TFP Student Action has already collected more than 8,200 petitions, urging Msgr. Daniel Dillabough, director of Mission & Ministry at the University of San Diego, to cancel the sinful show.  However, the only response from university officials so far has been to justify the event or present reasons to endorse the homosexual agenda. 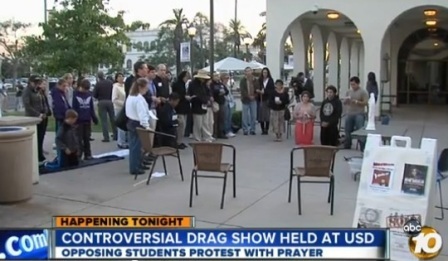 Ailsa Tirado, a current USD student who helped organize the 2013 rally, stated that "the University of San Diego is unquestionably being deceitful by identifying itself as a Catholic University, while permitting the acceptance and promotion of an ideology that is in direct contradiction to the Catholic moral teaching and social tradition."

Charles LiMandri set up a web site called Alumni for a Catholic USD where he documents the university's departure from Catholic teaching.  In a letter to the president of USD, he writes: "a Drag Contest is inconsistent with the proper mission and purpose of a Catholic University.  It was because of this event last year that my wife Barbara and I, who are both USD alums, removed our son Joseph from USD.... my wife and I cannot in good conscience send our children to USD as long as it continues to allow events on campus which directly oppose the teachings of the Catholic Church.

In fact, the university's official web site promotes a list of sixteen "Scholarships for LGBTQ" students.  Those who in some way identify with the pro-homosexual movement are eligible to receive grants of up to $13,000.  For instance, the Bisexual Foundation offers scholarships for the purpose of "advancing research on the psychology of bisexuality."  And the PFLAG National Scholarship Program is looking for high school seniors who "demonstrate interest in service to the LBGTQ community," according to the web site post.

"Unfortunately, the University of San Diego is not the only Catholic university that allows anti-Catholic activity," lamented TFP Student Action Director John Ritchie.

"Other Catholic institutions of higher learning have drifted away from Church teaching as well.  According to TFP Student Action research, over one hundred Catholic colleges and universities -- including USD -- have student clubs or resource centers that promote the homosexual agenda," he said.  "That's nearly 50% of all Catholic institutions of higher learning, which demonstrates how far-reaching the cultural revolution is and why moral values must be restored and defended more than ever."

"A woman shall not be clothed with man's apparel, neither shall a man use woman's apparel: for he that doeth these things is abominable before God" (Deut 22:5).

I am appalled that your university plans to host a pro-homosexual "drag show" on April 14, 2016. I respectfully urge you to cancel it to avoid further public scandal.