-- Young volunteers with Tradition Family Property Student Action were ordered to “cease and desist” promoting traditional marriage at the University of Notre Dame on Friday, April 25.

“Permission to have a table had been granted through an officially recognized on-campus student group,” said TFP Student Action director John Ritchie.  “But that permission was revoked for some odd reason.  Police officers arrived soon after we started giving out pro-family literature and cut the event short, informing us that we were no longer welcome to talk to students about the importance of preserving the sanctity of marriage between 1 man and 1 woman, which fully agrees with 2,000 years of Catholic teaching,” Ritchie explained.

The TFP handout, 10 Reasons Why Same-Sex “Marriage” is Harmful and Must Be Opposed, was being warmly received by students and faculty members alike. However, several pro-homosexual students ripped up the flier, shouted obscenities, and expressed their desire to deprive the pro-true marriage volunteers of their right to free speech. 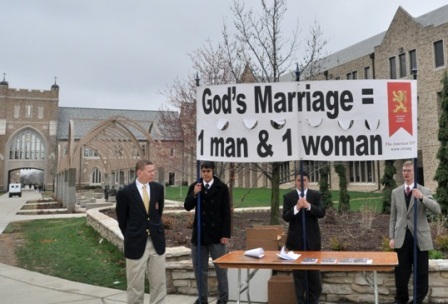 “I’m still trying to fully understand why the event was shut down,” said Ritchie.  “I was hoping to find a more supportive environment for the Catholic position on marriage. But instead, Notre Dame police officers told us that we only had proper permission to have a table – but that nobody was allowed to actually man the table, which was the whole point of having a table in the first place. How can a table man itself?  So we were forced to leave.”

"It seems like the more you hear about inclusion and diversity in higher education, the less you hear about the truth, the more the truth is shut out of the conversation" added Ritchie.  "We need to pray for all the Catholic students at Notre Dame who are fighting the good fight for moral values and the defense of natural marriage.  Because the future of our nation depends on the very institution of the family, united by mother and father, and open to the children that God gives them."

For a more detailed report, see: Promotion of God's Marriage Gets Cheers and Jeers at Notre Dame