How often do you see a cheerful group of forty young men praying the rosary outside Planned Parenthood?

The participants of the 2014 Call to Chivalry Camp put the spirit of Catholic knighthood into practice with a simple yet powerful demonstration on June 11 outside Planned Parenthood in Camden, New Jersey.  Several boys held a banner, stating: “With God’s grace, our generation will stop abortion.” The honks were continuous in response to a "Honk for Life" sign.

The youthful rally made Planned Parenthood pro-abortion workers panic.  According to a police officer who showed up, they were so upset that they called 911.

"You're not in trouble," said the officer, "They [Planned Parenthood] called us and said that you were blocking the sidewalk, stopping traffic and throwing red paint at people…,” then pausing and looking at the boys peacefully praying the rosary and singing hymns, he continued,  “but that's obviously not the case. You’re perfectly within your rights to stay as long as you want. If you happen to need us for any reason, give us a call."

This was the first rally against abortion for many of the boys.  The sound of the bagpipes boosted their morale and encouraged those passing by to support the right to life.

To conclude, three Hail Mary’s were prayed and the TFP battle cry was given: Tradition, Family, Property (three times)… America, America, America. The young men liked it so much that they wanted to prolong the event and asked if more rallies were on the agenda during the camp.  By doing this honorable deed for the unborn, they were living out the Tenth Commandment of Chivalry:  “Thou shalt be everywhere and always the champion of the right and the good against injustice and evil.” 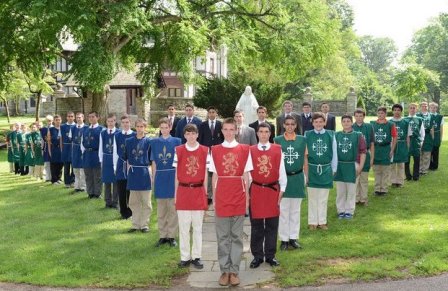 From June 4–15 the annual Call Chivalry summer camp took place at the St. Louis de Montfort Academy in rural Pennsylvania. The historic theme of this year's camp was medieval Germany.  One of the first talks was about the heroics of Blessed Charlemagne, the first Holy Roman Emperor.  His example set the souls of these young 21st century knights on fire and made their games much more lively and chivalrous.

Other talks focused on the life of Saint Peter Canisius, the Teutonic Knights, the virtue of purity, the progression and history of the sword, and the importance of devotion to the Blessed Virgin Mary.

A presentation on traditional German architecture captured scenes of elegant villages, the famous Castle of Neuschwanstein and the breathtaking spires of Cologne Cathedral.

After looking at the past, participants discussed ways to fight for Christian civilization now and in the future.  Zechariah Long and James Donlon of TFP Student Action showed videos of TFP campaigns for true marriage and explained how the protest against the "satanic black mass" scheduled at Harvard University was successful in closing it down.

Everyone was exhausted after hiking up a long stretch of the Appalachian Trail.  The stunning view and a hearty lunch, however, afforded them with enough energy to hike back down.  Stooping to drink from a stream made them feel like pilgrims on their way to the Holy Land.

The stamina of the boys was admirable for the very morning after the hike, they were wide awake and ready to take part in a series of tournaments:  ping pong, archery, tomahawk throwing and chess. Winners received prizes such as a statue of a knight or a good book.

French football, capture the flag, dodge ball and shield ball are other camp favorites, not to mention the treasure hunt saga.

The Vigil of Arms

Beginning on the night of June 12 at ten o’clock, camp participants took part in an all night vigil before a relic of the True Cross. It was custom in the past that any young man who wanted to become a knight would stand watch and dwell on what Our Lord said to the apostles in the Garden of Gethsemane: “watch ye, and pray that ye not enter into temptation.” The young squire would remain all night in prayer, never sitting, but only standing or kneeling.

While singing “We Want God” composed by St. Louis de Montfort, camp participants processed solemnly into the candle lit chapel.  Armor and swords set upon the altar harkened back to the days of holy Crusader Saints.  Colorful heraldic flags dangled from the ceiling, bearing crests of heroic knights.  Entering last, two candle bearers escorted the relic into the chapel where it was venerated. Every half-hour the young men would exchange places to permit all the participants to take part in the vigil.

One participant said to a counselor: “I bent the rules and hope it's ok.  I spent five hours in vigil.”

The last day is suddenly upon us and every summer camp participant awakes excitedly – “today’s the day of the medieval games.” This is when all of the skills learned at camp are put to test. Two teams face off in a fast-paced competition, culminating with an elaborate obstacle course complete with waterslides and rope swings.

Once the competition is completed, a rosary procession to dinner sets the tone for the rest of the evening.  Already in the banquet hall bedecked with flags, a roasted pig made its entry and, later, at the sound of a trumpet blast, a marvelous castle cake arrives, dazzling those in attendance.

Then, a surprise.  Armed knights enter and tell their hosts about the unexpected arrival of a noble guest: King Henry V of Agincourt fame.  The poetic St. Crispin’s Day speech ensues.  You look around the hall and witness how the virtue of chivalry is alive and well.

Yes, the spirit of chivalry still resonates in souls. It gives us a higher reason to live.

Can you help out with a gift?