The rain came down in thick sheets, pelting the windows. The young men at the TFP--Louisiana Call to Chivalry Camp continued to pray their rosary in the main room of the Feliciana Retreat Center in Norwood, Louisiana.  Claps of thunder, lightening and the whistling wind suddenly caused a power outage sending the room into complete darkness.

The only light that continued to illuminate the room came from two small shrines to Our Lord and Our Lady.  These traditional German style shrines provided the only source of light amid the darkness during the raging storm outside.

This small episode spoke to the souls of everyone at camp: amid the current chaos and moral darkness engulfing modern society, the only true light that continues to illuminate our path forward is provided by Our Divine Savior and the Blessed Virgin Mary, "our life, our sweetness and our hope." 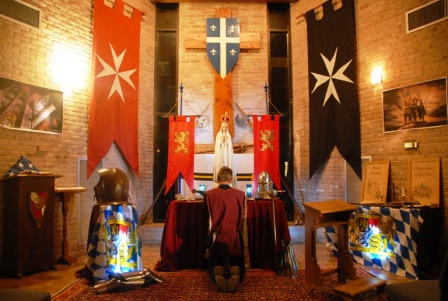 Vigil of Arms before a relic of the True Cross

This year's theme focused on the Catholic heroes of Germany. Accordingly, the meetings were filled with examples of great men, from the warrior monks of the Teutonic Order to the lives of great saints such as Saint Peter Canitius.  Every meeting strove to equip camp participants with the spiritual tools they need to remain faithful in our difficult days.

On July 7, the boys attended the Holy Sacrifice of the Mass kindly offered by Father Jambon at Saint Patrick's in New Orleans.  It was the best spiritual preparation for the next activity: a peaceful prayer rally in defense of the unborn.   In the highest spirit of the Ten Commandments of Chivalry, camp participants went to a Planned Parenthood construction site on Claiborne Avenue where the construction of a new abortion mill has been stalled.

Signs and banners opposing the culture of death were visible.  The public response was overwhelmingly positive.  Hundreds of people honked their horns and gave friendly waves to the young men while they prayed the rosary and chanted slogans in defense of the unborn, who are mercilessly slaughtered in the name of "choice."

In addition to the many prayers and informative talks, an exciting selection of games fostered teamwork and camaraderie and offered campers the chance to apply the principles of Chivalry in concrete ways.  Unique and original games, such as Shieldball and French Football, were opportunities for the young men to not only spend energy but, more importantly, develop the virtue of perseverance in adversity, self-discipline, piety, and honor, as the crusader Saints of old.

Another highlight:  Self-defense class with Paul Zis, a black belt in Judo.  Each participant learned basic skills to defend himself.

Hope for the Future

The purpose of the TFP Call to Chivalry Camp is to encourage as many young men as possible to live by the highest principles and virtues of Catholic Chivalry, the very same ones that brought Christian Civilization to its glorious apogee.

When those same ideals and virtues are forgotten or cast aside, as they are to a large degree today, Western Civilization begins to crumble.  However, against all odds, a new generation of men are embracing the ideals of Chivalry with renewed enthusiasm.  May God continue to inspire these young men to continue their peaceful quest to serve Him and fight for the restoration of Christian Civilization.

"The camp was a great experience and went by fast.  I really enjoyed it.  I didn't think I'd ever be able to come that close to Mary and my religion in nine days.  We played a lot of competitive games. The meals were great: The German dinner and medieval feast.  I had a lot of fun and I'm definitely going to try to come back next year." Favorite activities:  French football and treasure hunt.
-- Wesley D.

"I loved everything.  My favorite talk was about German castles and cathedrals and how the spires point to Heaven; I didn't know that before.  I liked the pro-life rally too.  We got 371 honks against abortion." Favorite activities:  Medieval games, obstacle course, and swimming.
-- Ben C.

"I didn't have time to be bored.  There were so many activities going on:  games, sword fighting, swimming.  The talk about the Medieval spirit helped me to understand the Middle Ages better.  Favorite activities:  Talks, German dinner, and pro-life rally.
-- Gregory O.

What Parents and Friends Say About the Call to Chivalry Camps

"Thank you, TFP! Your Chivalry camp and constant witness to the Faith have inspired me to fight harder, pray harder, and strive to daily grow more and more into the man whom God intended me to be. The lessons I learned at your camp years ago still challenge me today. God Bless and may Our Blessed Mother continue to intercede for your imperative ministry in the US and around the world."
-- Jeremy Balint

"Call to Chivalry Camp 2014 was the second year our son attended TFP camp. Everyday he talks about some element of camp life from the games, great food, talks, skits and the Vigil of Arms before the Medieval Games. This year, like last year, we noticed a difference in our son's behavior when he came home -- more willingness to help with chores and better listening. The Catholic manly atmosphere and the high standard of behavior along with great fun have a great influence on our son.  Michael can also be heard singing the hymns learned at camp all the time!"
-- Mrs. Dukes

"My only suggestion is - I wish it was the whole summer. All of you are amazing men and I thank God that Dominic has had the opportunity to be with you for the times that he has.  We as moms who see a sick world cannot thank all of you enough -- be sure of our prayers as Our Blessed Mother is more pleased with you than we are. You are very dear to Her Heart."
-- Bernadette Porter

"How wonderful it was to see such heroism!  Thank you, and all involved, who were responsible for providing such a wonderful camp for boys.  Gabriel had such a great time and talked about it for days to anyone who would listen!  The Chivalry Camp was tremendous and lived up to our hopeful expectations."
-- Bill and Stephanie Fonticoba

"It's refreshing to see young men with such a Catholic militant spirit [opposing abortion] at Planned Parenthood. I especially like how they used the time in traffic to display signs out of the bus. That was shockingly good for me to see..."
-- Mark Asso