The annual camp for Catholic boys and dads was held in a privileged place: Sequoia National Park.  The majesty of the giant trees, the rugged beauty of the mountains, and the marvelous star-studded skies at night made the adventure absolutely unforgettable.

As you may know, we wake up to the pipes and drums... well, today, we were treated to an early start: 6:00 AM.  One of our dear bagpipers forgot about the Pacific time zone! After forming up in front of the longhouse to pray the Saint Michael Prayer, we quickly realized the mistake.  Everyone went back to bed for another hour.

Bedroom inspection took quite a while!  But the young campers were shown by TFP volunteers how to keep their shoes, bed, bags (and themselves!) in tip-top shape.

After breakfast and Rosary the young men learned their roll call numbers (forwards and backwards), how to stand at attention (and not laugh), march in step, and sing We Want God and the Creed (in Latin).  Left and right turns seemed to be a slight issue… but everyone finally caught on after push-ups.

Next, boys and dads attended a presentation on King St. Ferdinand III – given by Mr. Damien Murphy – a TFP volunteer.  He spoke about St. Ferdinand’s profound devotion to Mary Most Holy, and how each of the participants can imitate him in this aspect. After all, St. Ferdinand never lost a battle! Our Lady answered his prayers in the struggle to free Spain of the Muslim scourge.

Rushing outdoors the boys played Shield-Ball, Capture the Flag and Dodge Ball.  But after a few minutes running at a 7,500 feet elevation a number of boys felt winded.  The terrain in the Sequoia National Park is bone dry and the ground is dusty, very dusty.  When the teams clash on the field a dense cloud of dust kicks up, almost completely obscuring their visibility.

Today's favorite game: “Brazilian capture the flag” (courtesy of a volunteer from Brazil).

The second presentation was about Don Pelayo who started the Reconquest of Spain from a small cave called Covadonga. When everything seemed lost, he and a few hundred men faced a Muslim army of 30,000.  The odds were impossible… but by a miracle, Don Pelayo and his men defeated the enemy.  In fact, according to chronicles, the Muslim arrows turned around in mid-air, and shot back at them. Our Lady also appeared in the sky instilling great fear in the Muslim invaders.

This miracle is a lesson for us as faithful Catholics are faced with many challenges that threaten the faith. But we should learn from the story of heroic confidence that when human solutions are exhausted, we must turn to God and pray for supernatural solutions.

Mr. Byron Whitcraft gave a hands-on presentation on swords and swordsmanship.  He dispelled myths portrayed by Hollywood and showed us the principles of true fencing and authentic sword-play.  The boys enjoyed watching a few live bouts of saber fighting—with plastic sabers, of course, and always wearing fencing masks.  Then some boys got to split water jugs with a real sword, showing them that it doesn’t take brute force but correct method and timing to be effective with a sword.

At dusk, we sat around a campfire as Mr. Joseph Jordan read riveting stories about big-game hunting in Africa.

We set up two big tomahawk throwing stations, using logs as targets. As we were throwing them, a young buck approached from the woods.  It was attracted to the “thuds” of the tomahawks hitting the logs.

We are about to finish up a game of charades, then head to bed before the power (generator) is turned off for the night. 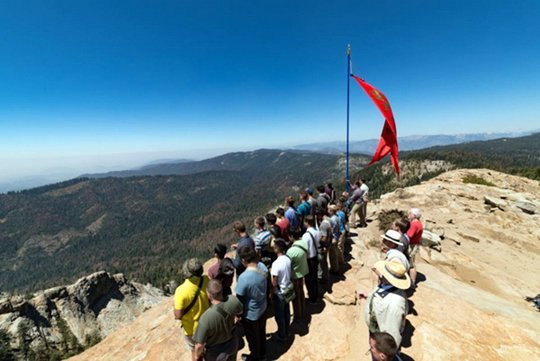 Day Three:  August 3, 2016
This time the bagpiper woke us up at the right time, 7:00 AM.  After a biscuits and gravy breakfast, the boys attended a presentation by Mr. Michael Gorre on El Cid Campeador.  Although mistreated by his lord King Alfonso, El Cid always respected the king’s rightful authority.  We learned how El Cid won every battle he engaged in even when vastly outnumbered.  Mr. Gorre ended the presentation telling us that although we don't live in the Middle Ages anymore, we must be willing, as El Cid was, to defend the Faith courageously.

After a short drive to Red Canyon, the whole camp set out to see the magnificent redwood trees. We found a tree so big that every boy -- 25 people -- fit inside its hollow trunk!  Some trees date back to the time when Our Lord walked this earth.  Besides the huge trees, there were also amazing panoramas to admire. For some participants, it was the first time they had ever seen a redwood.  It was a meditation on God's grandeur.  We also met firemen who were doing controlled fire burns throughout the park. Altogether, the hike lasted four hours.

Upon returning, we all showered. Then we had a presentation on Spanish Castles and Cathedrals by Mr. John Ritchie.  He talked about the Catholic mentality of the men who built them.  He also contrasted the castles and cathedrals with modern architecture, which expresses a materialistic mentality devoid of beauty.

Tournaments for chess, pellet gun marksmanship, archery, and ping pong are under way.

We prayed the Rosary while processing through the grounds of the camp. Then indoor games were held.  Even after a four-hour hike, the boys were eager to start Prison Break at dusk.

The first presentation: St. James the Apostle, known in Spain as Santiago Matamoros.  Mr. Rex Teodosio recounted incredible stories of the saint’s life, and events that occurred after his death, such as his appearance during a crucial Christian battle. According to witnesses, including many terrified Moors, Saint James appeared on a white horse, with a fiery sword in hand. He led the outnumbered Christians to victory, after dispatching quite a few of the enemy. The boys loved this story.

The boys played British Bulldog, Circular Dodge Ball, Presidential Dodge Ball (three boys prevent the “president” from being hit by the ball), and Steal the Bacon.  It was tiring.

Second talk:  The Rosary and the graces that can be received by its daily recitation. Mr. Byron Whitcraft gave us Rosary meditation booklets to be used while saying the Rosary, with beautiful pictures and short meditations. These will be put to good use.

We walked to a nearby waterfall for a group picture. After that, dinner was served and  Mr. Michael Chad Shibler talked about Spanish bullfights.

The final activity: stories by the campfire.  Oh, and of course we had s’mores!  This was our second campfire at camp with riveting accounts of wild bear and big game hunting, close calls with lions, and tales from the Crusades. The boys always want “just one more story!”

Tomorrow we will hike Big Baldy, a 4.2 mile round-trip. The elevation is over 8,000 feet. The view will be absolutely breathtaking, so we will bring packed lunches so we can admire the beauty of God’s creation.  We will also pray a Rosary at the summit.

At 9:00 AM we had a meeting on the Siege of Granada and the expulsion of the Moors from Spain by Mr. Joseph Jordan. For the boys, the year Granada fell was easy to remember since it was the same year Christopher Columbus discovered America – 1492. And if they still had difficulty, “1492” was one of the things they had to act out in Charades.

Mr. Jordan described the epic battles that led up to the eventual fall of Granada, the capital of Moorish Spain, captivating the boys.  He then went on to say that we have a similar threat today - ISIS and the constant threat of terrorist attacks. But like the Spanish crusaders, we must be physically, mentally, and most importantly spiritually ready to meet this threat.

We hiked Big Baldy.  On the way up we came across a huge patch of pine cones.  It didn’t take much encouragement for the boys to start a pine cone war.  Regrettably for some, however, we had to continue up the mountain.

What views.  The panorama was breathtaking.  You could see for miles in every direction.  We stayed up at the top for over an hour, taking in the view and having lunch. We then prayed a Rosary and sang We Want God, a song composed by St. Louis de Montfort, the great Marian apostle and author of True Devotion to Mary.

Immediately upon returning to camp, everyone showered.

Final tournaments were held for archery and tomahawk throw. We also played Charades based on the concepts and history lessons conveyed in the meetings, helping the boys to remember what they learned.

After dinner, a meeting on the activities of TFP Student Action was given. Videos of the March for Life in Washington, D.C., the protest in Oklahoma City against Satanism, campaigns for traditional marriage, campaigns against blasphemy were featured.  For the boys, it showed how a modern crusade is conducted -- peacefully and legally. It also showed how to debate properly without lowering the argument to a personal level but always keeping the discussion in the realm of principles.

Tonight we spent time venerating a relic of the True Cross.  The room was lit with candles, creating a sacral ambiance for prayer.

Today is the final day.  The boys are somewhat exhausted but still eager for the Medieval Games and Banquet.

After morning Rosary the boys picked teams.  Games started at 10:00 am, and the field was decked out with medieval flags, TFP standards, and the American and Papal flags.  At 3:00 the boys ran through a special obstacle course – it was exhilarating!  So much so, that some of the dads felt they had to participate.

The final game was Tug of War.

The final Rosary procession was more solemn with heraldic flags and the statue of Our Lady of Fatima.  The Medieval Banquet was a feast: steak, chicken, pork tenderloin, and fresh corn right off the grill.

With a prayer of gratitude to Our Lady, the camp closed.  But the spirit of Catholic chivalry lives on in the hearts and minds of the boys and dads who, during this retreat, renewed their love for Holy Mother Church and willingness to defend the Right, the True and the Beautiful.